A Career in Language Translation 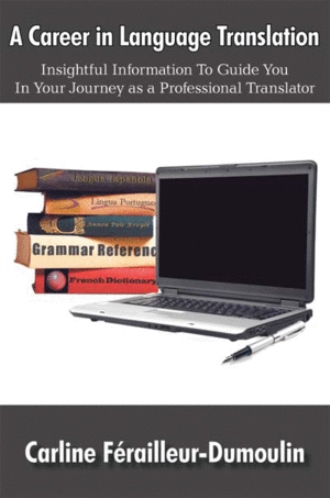 Translation involves more than the conversion of text from one language into another. As a translator and/or interpreter, our role is to facilitate the cross-cultural communication that is needed in our world today. In addition to converting words or text, we transmit concepts and ideas from one language into another.  A translator or interpreter, must fully understand the subject matter in which he or she works, in order to accurately convey the information. At times, translation involves research. Words or expressions evolve over time. And also, new words or expressions are created from generation to generation. As a translator or interpreter, we must familiarize ourselves with the current trends and expressions being used so that our translation accurately reflects the actual cultural meaning in the target language.

Even though the words translation and interpretation are used interchangeably, there is a significant difference between the two.  As a professional, you must be aware of that difference and recognize which one you have the expertise in.  Translation is the conversion of written text from one language into another.  As a translator, you must have excellent writing and analytical skills. You must also have good editing and proofreading skills.

On the other hand, interpretation involves the conversion of one spoken language into another.  This means that a good interpreter must pay careful attention to what is being said, he or she must understand the subject matter being communicated, and must be able to clearly express the thoughts and ideas needed to be conveyed.  Strong memory skills, analytical skills and communication skills are required.

A translation career can be a very lucrative one.  The industry is a very fragmented industry.  There are few large companies; many medium ones and small ones generating less than $500,000 in annual sales; the very small companies are comprised of freelancers who've incorporated and run their companies alone.

A freelance translator has great potential to earn revenues as high as $80,000 a year.<

This book is a must-have for anyone interested in language translation. It is a valuable tool for those looking to embark on a translation career and those already in the field. Faculty members teaching translation courses, current and graduate students and translation business owners will undoubtedly find this book to be an indispensable resource.

It serves as a guide and reference material for the language professionals seeking to hone their skills, sell their services, generate more revenues, equip themselves with the tools necessary to ultimately excel in the field. It contains a wealth of information and reference on how to develop a translation career. If you are interested in entering the field and do not know how to start, you will most certainly find your answer in this book.

The book  also covers everything from preparing your resume, preparing your business cards, working as a freelance translator, as an in-house translator, for an International Organization or for the Federal Government, to running your own translation business. It also arms you with information on how to market your services, how to beware of Internet Scams targetted at professional translators and interpreters, how to address payment issues, among other things. This book even covers the legal aspect involved in language translation.

Carline Férailleur-Dumoulin is the founder and President of CF Professional Translations, LLC. She holds a Bachelors Degree in Economics from and a Certificate in General Translations from . She is a member in good standing of the American Translators Association (ATA) and of the American Council on the Teaching of Foreign Languages (ACTFL). She has over 13 years of experience in language translations. She taught a Spanish translation course at in , managed the Translation Department of a private translation company in for close to 2 years, and has 10 years of experience in the banking industry in administration, operations, customer relations and international departments. Ms. Dumoulin is also a Language Test Evaluator for several translation companies in the . Furthermore, she has worked abroad in , , , Puerto Rico and the . She is fluent in English, French, Haitian Creole, and Spanish.  She has been a guest speaker on blog talk radio with Anthony "Spark Plug" Thomas, the founder and publisher of People You Need to Know, an Atlanta-based business publication.  Her company is featured in the 2009 Edition of People You Need to Know magazine and has also been featured in the 2007 and 2008 Editions.  Carline has always had a passion for languages, ever since her adolescent years and she looks forward to her many more valuable years in the language and translation industry.