From Sugar to Diamonds: Spanish/Mexican Baseball 1925-1969

by Jody L.; Gabriel A. Lopez 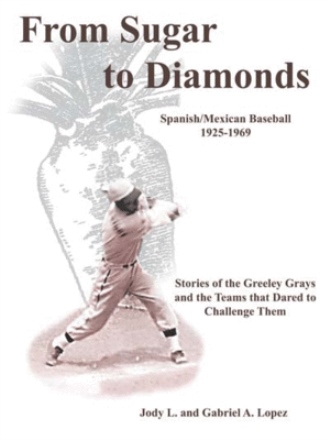 The love of the game was like an infection. It dominated the sugar beet colonists throughout their lives as stoop laborers. In the Greeley Spanish Colony, as in most of the colonies, it was the children's dream to play for the home team. Playing from a young age is what made them good. As soon as a child from the sandlot team was old enough to be a Greeley Gray, he was a Gray. The Grays became a team to be reckoned with.

The players used a baseball until it literally fell apart. The Greeley Grays made their own baseballs with the help of colony residents using old socks. When it was time to play in a big game or tournament, the manager of the colony team would go into town to Jones's Sporting Good store and purchase a baseball for the game. This ball was also used for practice or other games until it fell apart, and then it was taped to keep the string around the ball. When the ball was used up and ready to be thrown away, they would take the string off and save the little rubber ball in order to make another ball from another sock for the next game or practice.

The players cherished their equipment.

Rico Lopez: "The guys, if they got hold of a glove, they had it for life.  One could not afford to buy another glove, so taking care of it was important. It would have been oiled almost every day. Oiling it made the leather soft and durable. I remember Paul Villa's glove looked like a taco, but he could really glove [catch] the ball."

The 1930s posed many challenges for the baseball teams. There were disputes between Great Western Sugar Co., the farmers and the laborers: strikes, labor disputes and the Great Depression. Many of the players in order to help support their families, joined government sponsored programs such as CCC camps (Community Conservation Corp) camps and the WPA (Works Progress Administration).

Tito "Butter" Garcia, a Grays player, later turned coach and manager: "The colony players would play in their street cloths; they would tuck their pant legs into their socks.

Frank Carbajal: "George Villa was very unique and I was 15 yrs old. We were playing, and it was late in the summer. In a league tournament in Fort Collins, we went on to win. After the game, I am ready to get into somebody's car, and I said, 'lets go home.' George Villa put his arm around me and said, 'Just relax. We are staying at the Greeley Grays Hotel tonight.' I thought, man, this is first class. I assumed, we are going to stay in a hotel instead of going home. So after the game we went across to the park, the women were making great food, everybody pitched in and brought stuff, and we were eating. Of course, there was always the perfunctory beer around, the drink of choice.

It's getting later and later, so I said, 'Hey George, when do we go to the hotel? He said, 'Come here.' So he took me over by this tree, leaned up against it and says, ‘This is the Greeley Grays Hotel,' and fell asleep. I was shocked, so we slept under the tree and woke up the next morning to the women cooking some good breakfast. I wasn’t prepared for that. It hit me unexpectedly, but I found my tree, and we pretty much all slept in the park, without blankets. It was hot enough; the nights were not so cold.

They were great memories and what a way to break in the team. It didn’t matter to them [Grays players] that you were just a youngster. You had to go through the rights of passage if you wanted to be a part of it [baseball].

Prior to 1910 and continuing into the 1920s, Great Western Sugar Company aggressively recruited Mexican Americans from Southern Colorado, New Mexico, Arizona, and Texas. Mexican Nationals were also recruited, especially after World War I. By 1920, 10,000 of the 12,000 workers employed by the company were of Hispanic heritage.

Looking for an effective way to break the “migrant cycle” and keep the “elite” Spanish-speaking workers---along with their wages---in the area, the company launched a plan in 1922 to establish colonias or housing for the beet workers on company-owned land throughout northern Colorado, Wyoming, Nebraska, and Montana. Workers were provided a lot at minimal cost, and given a plan for building a two-room adobe home, through their own “sweat equity” for their families.

Work in the beet fields was arduous, and the men and boys of “la colonias” found recreation and relief from beet work in baseball. Local teams were soon formed, and teams traveled to neighboring towns and “colonias” to play. The teams got together to form an organization that later became the Rocky Mountain League of the National Semi-Pro Baseball Congress.

On Sundays, many Spanish/Mexican players and their families enthusiastically stepped up to the plate and became a part of America’s “national pastime.” The teams’ reputation for consistently high caliber players and great ball games brought them to the attention of envious players from outside “la colonias.” Soon, friendships were established among players in the various colonias and other towns, many lasting a lifetime. Race was never an issue and no “color lines” had to be crossed. The integrated sugar beet league was unique and ahead of its time. Spectators honked car horns, screamed loudly at the players and umpires, and created good-natured rivalries among teams and fans.

Jody and Gabriel Lopez are natives of Cheyenne, WY, but have resided in Greeley, CO since 1996. In 2000, they decided to conduct genealogical research.  Several ancestors were residents and leaders of Greeley’s Spanish Colony, a 1924 housing project or “colonia” conceived by the Great Western Sugar Company for its “elite” Spanish-speaking workers.

Peggy A. Ford, Archives and Research Coordinator for the City of Greeley Museums, realized the value of systematically documenting information from first and second-generation residents of the Colony. Jody, Gabriel, and Peggy have conducted over 50 oral and video interviews with former baseball players. Soon, the idea for organizing the oral recollections into a book gained momentum. Gabriel and Jody visited individuals, libraries and archives in northern Colorado and southern Wyoming to locate documents, images, and secondary resources.

This research enabled them to obtain many photos, artifacts, quotes and newspaper articles for a roving exhibit on the Rocky Mountain League and other leagues that played against the Rocky Mountain League, exhibited in the Greeley Museum and Cheyenne Civic Center. As museum volunteers, Jody and Gabriel share their research and knowledge about this region’s Hispanic heritage in programs for museums, schools, colleges, and special community events.

As “grass roots” historians, Jody and Gabriel logged thousands of hours to seek, document, and publish the stories of the struggles and accomplishments of Hispanic farm workers who lived in one Northern Colorado “colonia.”  From Sugar to Diamonds preserves an important aspect of Northern Colorado’s and Southern Wyoming’s history and culture for future generations.