Tales From Tubblewood Too: Miss Duck to the Rescue 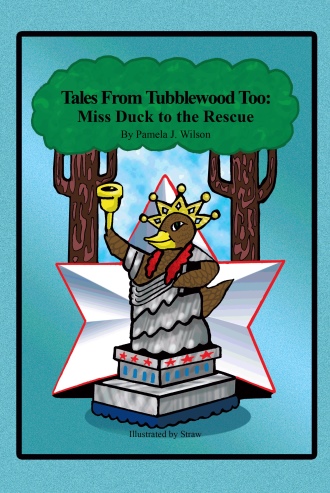 Right when they reached Choco’s Chocolates and Licorice, Nutmeg and B.J. saw some other youngsters.  They seemed to be having fun on the edge of the woods next to the store.  Some of them were members of Nutmeg’s club, the Squirrel Scouts.  Some, though, were animals they didn’t know.  They scampered over to see what these youngsters were playing.

Carl was a classmate of Nutmeg’s.  They had been good friends for many years.  When Nutmeg met Chewie, though, he felt Chewie was a little on the tough side.

“Hey,” began Chewie, “you two have any money on you?  I’ve got some fireworks for sale.  They aren’t those sissy sparklers.  These shoot up in the air and light up the sky.  They’re really cool.”

Nutmeg and B.J. turned and smiled at each other.  Although treats at the candy shop sounded good, fireworks sounded even better.  They gave the spending money the Colonel had given them to Chewie.  He, in turn, gave them two bottle rockets apiece.

Seeing that they were new to fireworks, Chewie offered to show them how they worked.  They agreed to shoot one then and to save the rest for the Fourth of July.  As Chewie lit the rocket with some matches, he told the other youngsters to step back.  The rocket soared through the air.  As Nutmeg and B.J. watched this exciting sight, they thought that their money had been well spent.  However, as the rocket was traveling upward, it got caught in a tree.  The leaves were soon on fire!

Jerry and June Pigeon went flying from their nest, which also had caught on fire.  Thankfully, their son, Walter, was playing at a friend’s nest in another tree.  Jim Bobcat, who was taking a nap on a limb, came fleeing down the trunk of the tree.  As he was running, he stubbed his paw and broke it.  Peapod, a flying squirrel in the Scouts, was playing nearby.  He recalled his Scout training and started collecting water in acorn caps.  He then glided close to the fire while throwing water on it.  He also kept his Scout training in mind to make sure he kept a safe distance.  The Colonel, along with Marty and Jessie, came running toward the fire from the Grill.  To Nutmeg’s and B.J.’s dismay, they soon heard fire engines roaring.  They knew they were in trouble with a capital “T.”

Ezra Bear, one of the firefighters, scaled the tree with a water hose grasped in his claw.  Between him and Peapod, they quickly put out the fire.  Jim Bobcat was the only one hurt.  The Pigeons had lost their home.

Doc Badger, who also was dining downtown, soon arrived.  He started tending to Jim Bobcat’s injured paw.  Many other animals had started to gather at the fire scene.  They were trying to find the cause of the fire.  The first thing they noticed was Nutmeg and B.J., who were holding three rockets in their paws. 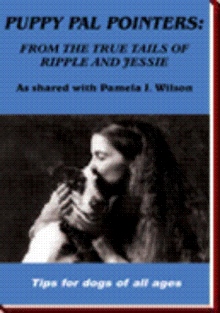 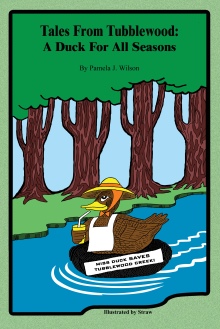 Experience the excitement of the holidays and the joy of the seasons with the colorful characters of Tubblewood.  Miss Duck would prefer to stay in the warmth of her cozy home sipping a cup of hot apricot tea.  However, her life always turns into an adventure when she is called upon to help a friend or a neighbor.  Throughout the year, you can join Miss Duck and her woodland friends in their escapades.  They may be assisting the groundhog with a mystery guest on his big day, correcting a problem after an April Fool’s Day prank goes too far, learning the meaning of Independence Day and how to celebrate the holiday in a safe manner, or working together to save Tubblewood Forest.  traditions for St. Patrick’s Day, Easter, Arbor Day, and Thanksgiving also are included.

There is a tale to be savored for every season in this collection of stories.  Intertwined throughout each story are valuable life messages.  Miss Duck and her charming entourage teach these lessons through their words and actions and demonstrate them in a positive manner.  The Tubblewood tales have universal appeal.  They can be comprehended by young children and still hold the interest and imagination of older children and adults.  The quality of the content spans all ages and any generation.  Additionally, special scenes are artistically depicted in beautifully designed illustrations.

Don’t miss the opportunity to create memories by sharing this enchanting group of holiday stories with your loved ones.  It’s certain to be a time-treasured addition to any household library.  Be sure to add to your collection another captivating book, Tales From Tubblewood:  A Duck For All Seasons, which contains stories in the settings of Valentine’s Day, Easter, summer vacation, Halloween, Thanksgiving, and Christmas.

Pamela Wilson currently resides in , with her cherished family of cats and dogs.  She has a bachelor’s degree in zoology and a master’s degree in health education; she also is a Registered Veterinary Technician and a Certified Health Education Specialist.  After working numerous years in an animal clinic, she established a career in veterinary public health; additionally, she teaches veterinary medical terminology at a community college and instructs at training workshops for veterinary assistants.  Ms. Wilson has received awards such as Texas Humane Educator, Veterinary Technician of the Year, H.E.A.L.T.H., and Alumni Achievement.  She combined her educational and professional backgrounds with her appreciation of children’s literature to write this captivating book of holiday stories and her endearing first book, Tales From Tubblewood:  A Duck For All Seasons.  She also created a book with valuable care tips relating to beloved dogs (and cats) of all ages, Puppy Pal Pointers:  From the True Tails of Ripple and Jessie.