An Awakening Spiritual Journey into Dirty Politics after Election 2008 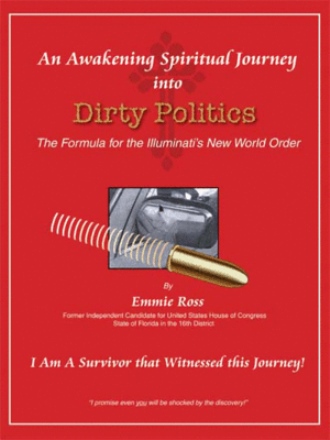 Fannie Mae and Freddie Mac's papertrail  to the White House

st Biblical Beast in the Book of Revelation? The Liberals would have ripped me along with the Book into threads in the Liberal Media.  It would have prevented the 2nd Edition of this Book from being published, and the clearance of Mark Foley by the FBI.  God’s word is final as he reveal to me. I stood on my formula and never doubt it.  The Liberals couldn’t touch this Book.  The FBI had given the Book creditability.  It cleared Congressman Mark Foley of the alleged “2006 Sex Scandal” which forced him to resign in Congress.

Once again, the Bible was being fulfilled.   It came to pass in September 2008; about three weeks before the

Economy Bubble of Fannie and Freddie.

th District of Florida when he fell on his hypocritical sword, and slowly bled to the death in politics before a shocked Democratic Party. Tim Mahoney’s hemorrhaging started when it was reported in the Media that Mahoney, as I stated throughout was brought into the Congressional  race back in July 2005 by Rahm Emanuel. To the dismayed voters, Mahoney was not a resident  of the 16th District that he represented in Congress! Here was a man who has spent 18 months masquerading as the Representative of the 16th District of Florida. In doing so, he was given authority to craft a bill on “Ethic Reform” which went into law, pushed major bills through Congress over the objection of the White House and the Republican Congress under a fake address.  Mahoney was not even an official representative in the House of Congress from the State of Florida. Lastly, Mahoney was masquerading as a Congress with no political experience or viable background in politics with the aid of Rahm Emanuel, Liberal Media and the Democratic Party. The shocked voters discovered that his legal residence was in the State of  New Jersey! Tim Mahoney had used his mother-in-law’s horse barn as his Candidate’s mailing address in the 16th District to qualify as a candidate in July 2005.

Rahm Emanuel who is now the Chief of Staff for President Barack Obama was aware of Tim Mahoney’s illegal status since July 2005. After all, as Rahm Emanuel stated, “He had to go all the way to Venice to get Tim Mahoney” in a fundraising letter that was mailed out to Democrats supporters around September 2005. Rahm Emanuel failed to tell the voters that Tim Mahoney’s Venice address where he got him was a

horse barn filled with wild oats, apples, bales of hay, and lots of horse excrement! That address was clearly an indication of Rahm Emanuel boasting, Tim Mahoney was from a far distance. How well do I remember Rahm Emanuel attempting his Chicago gangster style attitude while trying to force me out the Democratic Primary in eliminating all competition for Tim Mahoney bid in Congress to “clean up Washington, D.C."  I  wasn’t buy that gangster style attitude.

“Oh, it was only a minor technical error, no problem” attitude as the Liberals brushed it off and  had Mahoney give a residential address in the 16

th District. “It was just a little hiccup, nothing to worry about!” As a millionaire, Tim Mahoney simply purchased a home in Florida in the 16th District. After 18 months in Congress representing the 16th District of Florida with a horse barn address in Venice, the Liberals were now stating, “the problem resolved – end of story.” The Liberals merely place a huge bandage over Mahoney’s wound, and the Media dropped the story.

It does not stop! It gets even better.

The Formula for the Illuminati’s Order of 2012

The word “Awakening” also means “Enlightened” which refers to the Illuminati in Latin. It is the code name for a secret shadowy government through present day corporations that has been setup by the 1st Antichrist to control the world affairs. In order to achieve his goal he has to overthrow our capitalist government, and replace it with his secret agenda of a “Satanic New World Order” under Socialism.

Why did Jesus have to step in to protect the Independent Candidate for House of Congress in 2006?

An Awakening Spiritual Journey into Dirty Politic after Election 2008 will capture the Spiritual Holocaust that went beyond the moral fiber of one’s imagination and comprehension of evil by the superhuman power of the 1st Biblical Antichrist. This nonfiction riveting book is an awakening of how our taxpaying dollars have been orchestrated by him on the Federal level of the American Government with its partners in crime, the Democratic Party, some Senatorial and Congressional Republicans and Independents secretly embedded in the Democratic Party, and the Liberal Media. Four main ingredients are fueling it: greed, corruption, revenge, and power, which spell the Illuminati!

As my epic journey begins inside the spoon of dirty politics in January 2003, I will unknowingly walk directly inside the spiritual warfare of the principality of evil by the inner circle of the Illuminati. With the Living God standing by me, I have survived my journey. God wants the rest of the world to be prepared for what lies ahead. Evil and dirty politics can be defeated. That is why I have been chosen by God to expose my story to the world of what I personally witnessed.

As an active Christian, I was blessed to be far removed from the rest of world on 90 acres of beautiful rich land surrounded by nature where I spent the nurturing years of my childhood in Monticello, Florida, twenty-six miles east of Tallahassee under the watchful eye of maternal grandmother. The name “Emmie” is French means “to love.”

At the age of ten, I was reared by mother and stepfather, and graduated from Crooms High in Sanford, Florida.  I was given the opportunity to grow into adulthood, and enjoy the wondrous of what life had to offer.