Collapse of the Oasis of Liberties 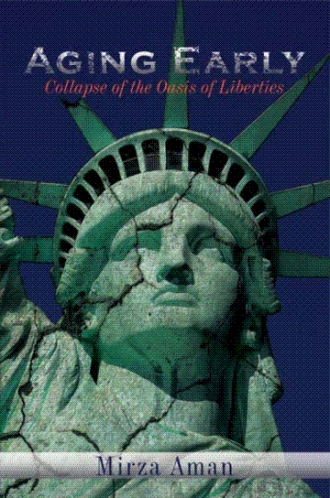 I read Thomas Jefferson’s wisdom: “Yes, we did produce a near-perfect republic. But will they keep it? Or will they, in the enjoyment of plenty, lose the memory of freedom? Material abundance without character is the path of destruction.”  I, as almost all researchers who studied the history and the political system of the , respect and admire Thomas Jefferson as a founder, the person who drafted the most important document in history - the Declaration of Independence, the third president and as a wise leader whose words always came true.  But despite all my respect for the man and my appreciation for his work and words.  I didn’t take his fears seriously.  I considered those fears a precaution from a wise leader meant to encourage and push the Americans to preserve their system and appreciate the freedoms and the rights they have been enjoying through being careful and avoiding all possible threats against the perfect republic he and his colleagues founded.

The developments that took place during my 25-year service at the American Embassy affirmed the soundness of my conviction.  When I joined the embassy the was just coming out of a costly war in .  It is important to understand that the war was put off by the people of the , who forced their government to end their brutality and the unjust fight.  The American government and through three key presidents, Truman, Eisenhower and Kennedy, ran that unjust war in Asia and refused to stop it, despite the high costs paid by the American people.  But when the American people realized that their rights, values, morals and ethics were violated, their wealth had been wasted and doctrines of their founders were not honored by their governments and rulers.  They stood firm against the war and forced their government to end its costly and “unacceptable” war in .

Soon after that came the Watergate scandal which forced President Nixon to resign, again because the American public considered him a man who violated some of their important rights.  The American people considered President Nixon confiscated their rights and violated the principles and the values which the was founded on and for.  Therefore, they worked hard to indict him and force him to resign because they saw him as unfit to lead their great democracy.

Those developments and many similar incidents in which American people stood firm fighting for protecting their principles and values, proved that the as a country and as a civilization will remain strong and will last a long time, perhaps forever.  In addition, the generosity of the American people and their willingness to provide aid and support and to share values and achievements with other nations strengthened my conviction that the American democratic and free empire was unbreakable and was immune against all kinds of breaches.

During those 25 years of service I lived through many attempts, from inside and outside the , to harm and change the values and the principles which the was founded on.  But all those attempts failed because they were deeply rooted in the culture and the practice of all Americans.  The motto of all Americans was “no one above the law” and the interests of the always come first.

The author tries to prove that there are no clashes between the values of the West, the American values in particular, and the Islamic values.  On contrary, they are similar and alike.  The differences are in the their policies towards each other.  Those policies, which, in the U.S. case, will lead not only to damaging the image and reputation of the United States but will also lead to its collapse because it has changed from as an oasis of liberties to a great violator for those liberties, thanks to President Bush and his policies.

Mirza Aman is a retired U.S. Government employee who spent more than 25 years serving the United States and it people and society through his position as "Public Affairs Specialist" at the American Embassy in Manama, Bahrain.  He was responsible for the designing and the implementation of academic, cultural, information and social exchange programs between the people of the United States and the people of the Kigndom of Bahrain.  He received several awards from the State Department and "thank you letters" from American presidents and Secretaries.  He is a writer, columnist and media expert.  He published three books in Arabic and has written many articles and analysis.