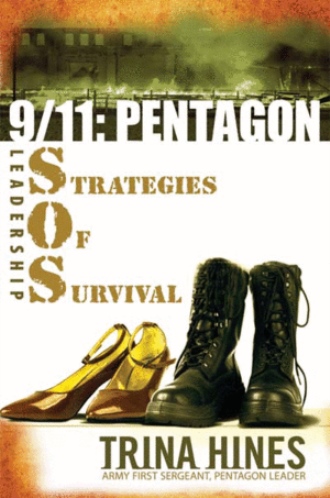 There is something special about this year that makes me feel I need to complete this book as soon as possible. The number seven signifies completion and this will mark the seventh year since the September 11 attacks on the World Trade Center in New York City, and on the Pentagon in Washington, D.C. The number eight stands for “new beginnings."

In July 2007, I started thinking it was time to write about my experience as a survivor of the attack on the Pentagon on September 11, 2001. As a novice writer, I did not know where to start. What I did know was that I wanted this story to be an encouragement to the reader. With so much going on in the world, I felt it was time to do my part to help someone to move forward in his or her life when faced with life’s challenges.  I have changed the names and locations in the book, except the Pentagon.   The military and civilian rank status and positions primarily is removed for easy reading.

In no way will I try to measure my experience or level of personal pain with others. Although, we may want to identify with others' pain, as we naturally should to bring encouragement, this is often a difficult if not an impossible task, since we are not walking in their shoes. The one thing I do know is that joy, pain, suffering, and grief will come across our paths at least somewhere in our lives, often when least expected, but we must find the strength, courage, endurance, and discipline to continue after a crisis arises.

Why discipline? Because discipline is doing, what you know needs to be accomplished when you do not feel like doing it, while having the endurance and integrity to perform the task when no one is watching. In life, you have to make sacrifices. There is no perfect scenario. Know you are doing your best and move forward. When you fail, get up, clean up, and move forward.

One reader may hear the voice of my heart; another leader may hear points for a case study, while still another reader will hear the challenges faced by a working wife or a mother.

There are situations in life where we have absolutely no control over  the events that occur; such are the events of 9/11, Katrina, changes in the economy, marriage, children, work, and so forth. Yet, each of us possesses strategies of survival (S.O.S.) that we can tap into in the midst of the unexpected.

The strategies listed in this book come from seasons of the unexpected events within Army First Sergeant (Retired) Trina M. Hines military career.  One such event occurred on an early Autumn day, September 11, 2001, when Flight 77 hit the Pentagon building and passed through her office.  Within this book, you will have the opportunity to hear the voice of  First Sergeant Trina Hines, a wife, a mother, a leader, and a survivor.   Most of all you hear how her faith” is the ultimate leadership strategy that makes her move forward in the midst challenges. This book is designed to encourage, motivate, and stimulate those who have experience life’s situations such as Trina have.

She has earned a Bachelor’s Degree in Social Psychology, a Masters in Education, and pursuing a doctorate in Education and Leadership with Education Technology emphasis.   Trina is the founder of a for profit Customized Global Learning, LLC and nonprofit Ceempowerment  meeting the educational and leadership needs of the diverse learner. To  invite Trina Hines to your next event or learn more about services offered call today (571) 330-4844 or visit http://www.hinescgl.com/ or http://www.ceempowerment.org/.