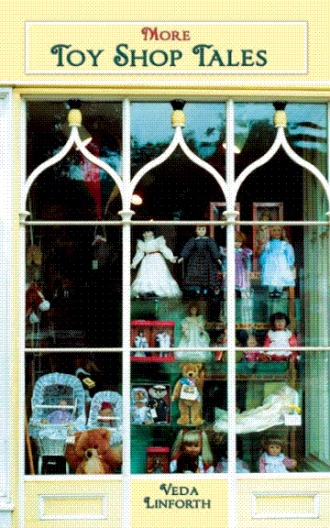 The toy shop was due to have a spring clean. Every year Florence employed the same cleaning company to give her little shop a spruce up ready for spring and her new arrivals. On this occasion she had decided to take a short break whilst the work was in progress. A week-end trip to see some relatives. It meant of course that all the toys had to be stored in a safe place until the work had been completed. The problem was where !. After pondering the why’s and wherefore’s Florence came to the decision that the safest place would be her own living quarters above the shop. It took several trips up and down the stairs with arms full of her treasured toys,together with the help of the staff of the cleaning company. Finally they were all settled in their makeshift home. The dolls and teds were all lined up on the couch and arm chairs. All the boxed cars,tanks and engines were neatly stacked against the welsh dresser. The large dolls house that had been delivered only that week was positioned on the dining table. It seemed every one was safely installed when Florence paid a last visit before taking her leave. She locked up and made her way downstairs. As the sound of Florence’s footsteps echoed down the street, big Ted gave a yawn “I thought that girl was going to drop me he muttered.“What if she had” piped up little Ted,”You wouldn,t have broken anything,not like the dolls”. “I know” replied big Ted “but it wouldn,t have been very pleasant,” “I thought they were very careful” said the Fairy Doll,” My dress wasn,t ruffled at all” she looked down at her lovely gown, brushing it carefully. Terry the train hooted “Peeep” Peeep! “ We,ll soon be back on our shelves”. “Meantime” he said looking around the room,” It’s quite comfy here”. Suddenly the dolls house lights began to flash on and off. “ Oh do be quiet” it moaned. It was the first time the toys had heard the house speak. Big Ted glanced up. As he was the longest resident in the shop he always took it upon himself to be spokes person. “Hello” said big Ted, “and what do we call you”. “ I’m called Manderlay” the house answered,” who are you” Big Ted stood up and proceeded to relate to the house everyone’s name. When he had finished ,the house turned off it’s lights and drew it’s curtains. “Not a very exciting group are you” it muttered through a slowly closing front door. With this comment they all settled down for the night. Next morning the toys were awakened by the sound of the cleaners. Vacuums roared as shelves were cleaned and cobwebs removed, the smell or air freshner polish and disinfectant floated upstairs. “Oooh something smells nice” said Gordon the Gorilla. “What do you mean ‘nice’ “ yelled the dolls house. “ It’s a terrible smell” “ I think it’s nice too “ said little Ted “It smells lovely and fresh just like Spring.” “ Don’t talk rubbish” said the dolls house. “ It smells like..like..oh I don’t know,just horrible.” With that the dolls house shut all it’s windows, which it had opened earlier, and closed the

Florence Jenkins is the proprietor of a small toy shop. She lives on the premises and unbeknown to her, each night after closing, and retiring to her little sitting room at the back of the shop, all of the toys come to life and get together for a chat. They discuss the happenings of the day and welcome any newcomers. They gather together and talk all night, but as soon as Florence opens her door to enter the shop next day they are all back in their special places in a flash, as if by magic. Each of these short stories is about Florence and her toys. They tell the tale of what goes on day to day, like when Florence goes to buy new additions to her stock and sometimes of the problems that arise between the toys. Florence is very particular about her toys, she insists on naming them all, her favorite toy is Big Ted. A large teddy bear, which was her first purchase when she first opened, and now she keeps in a prime position in her shop window.