War and living with PTSD: 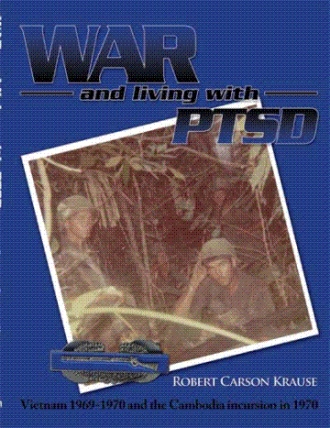 Preview of the book

This time we were doing something different, as the choppers came in to pick us up from Cu Chi; we landed outside a village and the ARVN base camp, near the Saigon River. The ARVN’s (South Vietnamese Army) were taking us out on these huge slow antiquated boats up the river to a place called the “Sugar Mill.” The Sergeant said we were there for security, and all the companies traded off guarding the Sugar Mill.

We set up that night for ambush and we were given orders that we would be moving locations each night so the Viet Cong could not detect our spot. There were also the villages that we couldn’t fire at as they were considered “ off limits.” We knew that the Viet Cong were in the villages, but again how could you tell the difference?

The next day we traded off posting guard and relaxed. This was the most “laid back” I ever felt in the field; however, you were still in Vietnam, which was a reality. The next morning three of us, Mac, Gilbert and myself, went inside the Sugar Mill to investigate.  When we walked in we saw two 10-year-old twin Vietnamese boys playing. We were cautious and one of the boys said “hey GI, you bic cigarette.” We gave them some and they smoked like they had done this for years. Their broken English and Vietnamese made it easy to talk to them as they had talked to many G.I.’s. We asked them what their names were and they said a G.I. once called them “Mutt and Jeff.” They were cute and were good at conning G.I.’s into giving them what they wanted. We asked them where their parents were and they said that “both parents had been killed by the V. C,” and they didn’t have any other relatives.

On another day we set up another ambush patrol and I radioed in our new location to the Dau Tieng base camp, which was where we were calling for back up. We positioned six claymore mines in front and rear of our location.

The monsoon rains began again so we put on our ponchos and poncho liners and sat in the mud for guard duty. Sergeant Baker told us again and again not to fall asleep on guard duty! He said we were not humping all day so we should be some what rested. At about 4 a.m., Mac came over and gave me the scope. He asked me to wake up Sergeant Baker and show him the six Viet Cong. We also woke up the grunts sleeping on the left side of us. The Viet Cong were moving from our right to the left in front of us.

I called back to the rear and they said they would keep this frequency open for us, and to,” keep them posted!” I said quietly “roger that!” Everyone was awake and to our right flank, Mac opened up and gave them hell.

Everyone else opened and we began clicking the claymore mines. You could then hear them return the fire, “crack, and crack, crack!” Five of the Viet Cong fell to the ground and the sixth one pulled the pin on a Chinese hand grenade and threw it over a hedgerow at the last person on line. The grenade blew up right in front of one of the FNG’s “fucking new guy’s” and blew him back five feet! He was hit in the chest with shrapnel and was having trouble breathing. Very quickly after, Doc applied sulpher on his chest and began to administer CPR to try to keep him alive! Meanwhile several grunts headed out for that sixth Viet Cong who made a rapid retreat.

Once it was all over several grunts went out to confirm the area and to verify the five Viet Cong were dead and there were not any others in the area. I went over to Doc and found out that the FNG was dead. Doc told a few grunts to put him in a body bag and in the morning, we would put him on a medivac chopper. It was amazing how three minutes ago you could hear explosions and yelling, and now dead silence. It was hard to take; knowing one of our soldiers had died. Sergeant Baker said to get back into position until the sun came up. You could hear a pin drop and nobody but Sergeant Baker said anything for the few hours before sunrise. The rain had not stopped so we settled back down in the mud and were completely soaked. We spent many nights like this, which made us vulnerable to all of Vietnam’s diseases.

I radioed the report to the rear and indicated five dead Viet Cong and one dead G.I. I also indicated that we would need a chopper to take the dead soldier out. The RTO in the rear said he would send a chopper to our location in the morning. I told him if he saw red the landing zone was clear.

I couldn’t help thinking about the new grunt that had been killed by the chinese grenade. I was thinking about all of the families and the terror they must have felt when they received that horrific letter. There was no such thing as an FNG, because when you were in Nam, you were just lucky enough to live and gain some experience. Even with that it didn’t matter

Two grunts carried our dead buddy back to the chopper and the same smell of that stench of death returned. All we could feel was that numbing feeling again! Sergeant Baker would have to write a letter home to his parents.

Robert was a carefree college student when he was drafted in July 1969. He was soon crawling through the steamed rice patties and fetid swamps of the Mekong Delta around Cu Chi and then in 1970 from April until June, the Cambodia incursion in III and IV Corps.

Robert spent a year humping the boonies as a radio telephone operator in the 25th Division. Through air strikes, firefights, and ambushes, he fought the grunts war; the war the base camp commandos never saw.
Robert captures the terror, anarchy, death, dying and trauma of war. All the bloody horrors that etched into the faces of countless young American men, searing images that would last forever in their minds and would last forever.
Robert was then stationed at Fort Polk, Louisiana (called little Vietnam) as an instructor to train future grunts in Radio Telephone Communications.
Betty and Robert returned to Denver and he completed his undergraduate and graduate degrees.
Robert then went to work on a long list of jobs (28). For the 30 years since he returned, he could not figure out what was  happening to him and was hospitalized for suicidal thoughts. He then began the Post Traumatic Stress Program at the V.A. Hospital in Denver and found thousands of "Brothers" were suffering the same truma.
One concern combat veterans realized very quickly was "you never get over PTSD," you only learn how to manage the symptoms.
Thousands of combat veterans have PTSD today as well as the Iraq and Afghanistan soldiers are or will experience.
This book is dedicated to the need to select leaders who believe war is the last solution and to quote Thomas Jefferson: "If a nation expects to be ignorant and free...it expects what never was and never will be."

ABOUT THE AUTHOR   Robert grew up in a low income, industrial city. The main form of gaining respect in this tough area was fistfights with other peers. In 1966 teenagers came in two ways. If you were a “soc” you had a

future. But if you were a “greaser,” you were an outsider with nothing other then friends. Like Vietnam, Robert felt like he was caught between childhood’s innocence and adult’s disillusionment. Robert didn’t graduate from high school but did learn survival on the streets that would help him later in his young life. Robert moved to Phoenix and began to learn a more progressive lifestyle.

He then entered College in California, but was drafted and had to return to Colorado for induction into the army.

After going through Nam and the Cambodia incursion Robert was one of the fortunate ones to return home or so he thought.

Robert then got serious about his future. In 1975, Robert graduated with honors from college. He double majored in Political Science and Social Work. He double minored in History and Economics. This is when he became obsessed with political science. He received a graduate degree from The University of Denver in Social Work.

Robert is involved with several Veterans’ programs and was a State Delegate in 1972 and in the recent 2008 campaign. This is Robert’s first book.