Book I Of The Shroobear Short Stories 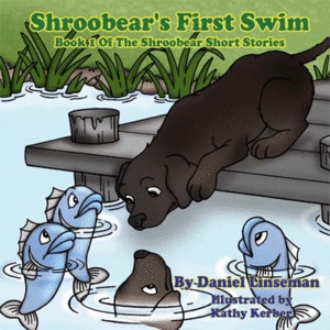 So Daddyshroo made little Shroobear feel better, and they walked down to the dock to feed the fishyshroos.

They threw fishyshroo food out on the lake, and the little fishyshroos happily ate it up, making little kerplunk noises in the water as they ate.

You see, Shroobear always stayed far from the edge of the dock because the water there was much deeper than in the rest of lake.

But on this day, little Shroobear got so distracted feeding the fishyshroos that she ventured closer to the edge of the dock than she ever had before.

And when she looked over the edge of the dock at the water, you will never guess what she saw . . .

Another little shroobear staring right back at her!

Now one thing that you must know about shroobears is that when one shroobear meets another shroobear, they always greet one another by rubbing their noses together.

So of course little Shroobear leaned far over the edge of the dock to touch noses with the other little shroobear staring up at her.

She leaned over so far that her little nose touched the cold water that made up the reflection of Shroobear’s face.

Shroobear became so startled by the cold touch of the water that she lost her balance and fell head first into Shrooville lake!

And then something amazing happened—

Shroobear's First Swim is the story of a tiny shroobear who learns valuable life lessons through interactions with her friend Frederick the froggyshroo. Shroobear is a fictional character based upon a lovable black labrador puppy that the Author once owned. In this story, Shroobear discovers that everyone learns to do new things in his/her own time. She also learns that the ability to forgive is a wonderful attribute that fosters friendships. This book is particularly well suited for parents who love to read to their 3 to 5 year old children and is also an excellent book for young children who are transitioning  into reading on their own. Please enjoy this book with your children and keep an eye out for new titles in the series of Shroobear Short Stories.

Daniel Linseman is a Professor of Biology at the University of Denver who enjoys writing children's books in his spare time.  He is a proud father of two daughters, Hope and Payton, who are ages 4 and 1, respectively. The Author developed a love of black labrador retrievers as a little boy whose best friend was his dad's black lab, Sal. As a young man, the Author acquired his own black lab pup and new best friend, Ashes, who was the original Shroobear and the inspiration for Shroobear's First Swim. After a wonderful 14 years together, Ashes passed on and the Author wrote this book in memory of their time together as best friends. The Author now has another black lab pup named Sophie who is constantly "auditioning" for a part in an upcoming addition to the series of Shroobear Short Stories. The Author hopes that children and parents alike who love dogs, labs in particular, and Shroobears most of all, will thoroughly enjoy this book.