Are You Guys Brothers? 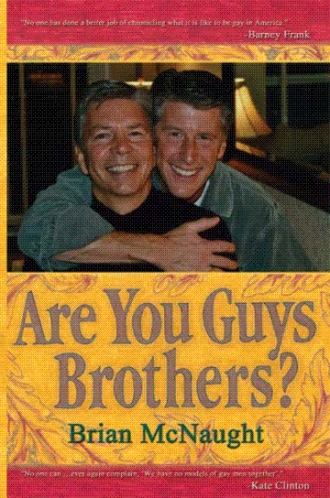 On the occasion of a heterosexual friend’s 60th birthday, Ray and I gave him a nicely framed picture of us on our 20th anniversary in . In it, I was behind Ray, holding him lovingly. Our heads were touching and we were both smiling happily. It was a beautiful shot, one we have given to our closest friends and family members. Our friend Jack thanked us with genuine enthusiasm, as did his wife Jean. He then handed it to the other two heterosexual couples who had just shared in the wonderful meal and delicious cake, and who were passing around cards and opened gifts for appreciation.

The next day, the two husbands who had been passed the photo, independently called Jack to say how unsettled they had found themselves feeling while looking at it. These were both very successful businessmen with whom we had shared more than one evening of dinner and board games in Jack and Jean’s home, and who had engaged Ray often for his opinion on the stock market.

My feelings were hurt, as they unfortunately often are when I let down my guard with heterosexual men and women and then learn that they were not quite as comfortable as they had given us the impression of being. Like the time that Ray and I, during our tenth year together, were entertaining his folks at our cabin in and we asked his dad to say the grace before the noon meal. We all held hands, closed our eyes, and listened as Art solemnly gave thanks for the food, and then reminded God that it wasn’t too late to send two good women into Ray’s and my life so that we might get married and have children. But I get hurt less often and less deeply today than I did ten or twenty years ago because I’m much less invested in the acceptance by others, gay or straight.

Reflecting on that incident at the birthday party prompted me to wonder recently if my father would have displayed the same photo of Ray and me in an embrace on his executive desk in the Public Relations department of General Motors. Would Ray’s father, despite his unrealized dreams for Ray, do the same in his real estate office, if he were alive and still working? Did their love of their sons ever embrace us fully for who we are, or was there any embarrassment with our intimacy, or shame that we weren’t “real” men?

I often quote Lieutenant Colonel Oliver North, a radio talk show host and former principal of the Iran-Contra scandal, who warned during Bill Clinton’s administration that if the President allowed openly gay people to serve in the military, “no real man would ever enlist again.” Most members of my corporate audiences laugh at the lack of sophistication of North’s observation, but my guess is that many of these same people would privately wonder about my relationship with Ray, as the vendors in Istanbul boldly asked us many, many years ago when we walked through the Grand Bazaar, “But, who’s the wife?”

If two men are captured in an intimate pose, does it mean that one or both of them are “unmanly”?  The very same photo of us in Central Park would draw little, if any, negative response from men in , , , or other countries where we have witnessed intimacy between all men as a common daily occurrence. Heterosexual men from India, in fact, have told me that one of the first lessons they needed to learn when they moved to the United States was not to hold the hand of their male friends in public, as it is seen in the U.S. as unmanly and an indication of homosexuality, which in America, they sensed, are the same.

That does not mean that men in these other countries are completely comfortable with homosexuality. Our tour guide in , for instance, in response to my query about local attitudes toward gay people, told us that there are very few homosexuals in . They’re all in , due to the fertilizer they use in that country to generate three crops of mangoes annually. The homosexuals in , he said, are transsexuals who want to be reincarnated as women in their next lives because it’s easier in to be a woman. (I decided that it was “a teachable 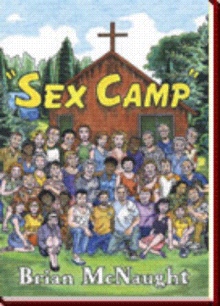 Same-sex intimacy, particularly between males, can be a challenge to maintain for gay and bisexual men, and extremely threatening to heterosexual men. Are You Guys Brothers?, a question asked of male couples throughout the world, is a very personal and candid look at the topic through the lens of an immensely happy and successful 32-year relationship. Brian McNaught and Ray Struble, both Irish Catholic, Midwestern children of seven, met in Boston in their twenties as one was beginning a career as a "gay activist" and the other was entering the world of commercial banking. Their love became the envy of their families and friends, marked by open communication, good humor, patience, and spirituality. They would need all four to navigate the mine-filled waters of childhood sexual abuse, alcoholism, intense religious and political opposition, dramatically-disparate incomes, a sexually-open relationship, aging, erectile dysfunction, and an often unsupportive and frequently dysfunctional gay community. Today, they are officially married, and the "gay activist" is now educating his spouse's former Wall Street colleagues on gay issues in offices around the world. This book is funny, deeply moving, and highly instructive, of particular interest to gay men and women who seek guidance in building and maintaining their relationships, and to heterosexual men and women worldwide who want to better understand not only gay people but also how to get past  the roadblocks to intimacy in their own relationships.

Named "the godfather of gay diversity training" by The New York Times, Brian McNaught is an internationally-acclaimed presenter to corporate executives and government officials on the topic of gay, lesbian, bisexual, and transgender workplace issues. His spouse, Ray Struble, was the Managing Director of Global Equity Sales for Lehman Brothers. Brian is a certified sexuality educator and counselor, the author of five other watershed books on sexuality and the creator of six highly-praised educational DVDS that are used in training throughout the world. All of his books have been required reading on college campuses and his DVDs have been shown on PBS television stations throughout the United States. Brian wrote a syndicated column in the gay press for twelve years, co-hosted a radio program, served as the Mayor of Boston's liaison to the gay community, and currently advises former Surgeon General David Satcher on matters of national sexual health. He graduated from Marquette University with a BA in Journalism in 1970, was a conscientious objector to the war in Vietnam, was fired for being gay by the Catholic newspaper of the Archdiocese of Detroit, and has worked since 1974 as an educator on gay, and more recently, transgender issues. You can learn more about Brian or reach him at www.brian-mcnaught.com.