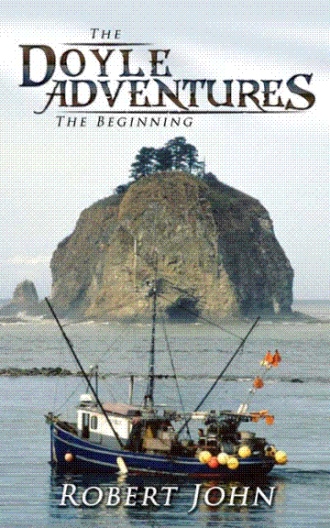 The vessel jogged sluggishly through the early morning swell, water flowed freely across the prow causing the deck to become as slippery as Ice.

Every now and then the Bow would dip under a majestic combing roller, seemingly stalling the forward progress of the 24 Meter “ALBATROSS” as it steamed towards the coming dawn and its day of reckoning.

The Man in the wheelhouse was tall, he had to stoop and pivot his frame to accommodate the broad shouldered torso his thick legs had to carry.  Hair bleached golden by the sun off the water, his blue eyes strained to see through the Plexiglas window, a temporary replacement to the original glass pane that was shattered by a wayward Mutton-bird the day before.

Steve Doyle gave up staring; he carefully put down his coffee mug, picked up the ships phone and pressed a number.

High up in the main mast, a shrill blast, startled the heavily wrapped form that was perched in the Crows Nest, letting his “MOONMAN” binoculars

fall into his brightly colored Waterproofs, Lammy Russell reached for the ship-to-masthead phone.

“Can you see them?” asked Steve.

“Not yet, old yellas‘ head hasn’t come up enough.”

Lammy picked up his binoculars and adjusted the lenses to accommodate the lightening sky to the east.

Steve placed the phone back in its cradle and swore softly to himself. This day signified the end of the Fishing season, and with the Governments new regulations coming into force on January 1st, Steve couldn’t help but wonder what the future would hold.

“Shark … Shark astern” came the cry from Lammy.  As one, Seven men leapt out of the racks and into the boat, the eighth man (Sam) had hooked his cumbersome wet-weather gear, on a piece of torn wire and was struggling to get free, the hungry shark drove menacingly alongside the Boat through the racks.  Just as the shark arrived close to Sam, Scales grabbed hold of his collar and with a savage jerk, lifted him from the rack, in the process tearing a great hole in the waders, neatly matching the slice in Sam’s’ Leg caused by the wayward wire on the rack.  The shark cruised by oblivious to everything and continued on its way...........

Life on a Fishing trawler working the great Australian Bight has it's ups and downs, Bad weather, crusty old fishermen, poaching, you name it the pittfalls are many. Steve Doyle has been a fisherman, taught by his father, for many years, but times are changing, new regulations to the industry are threatening his livelyhood and that of his loyal crew. Join Steve and his band of tough seadogs, as they take on the might of the Southern Ocean, unscrupulous fishing pirates, smugglers, the magnificent Australian outback and the rich Tuna fishing grounds south of Australia.

From the hard grind as a fisherman, and then onto an interesting diversion into life as a Hotelier, take a journey through his world, his friends, his sworn enemies and the many challenges that lie ahead in the ever changing life of 'Big Steve Doyle'.

Around 8 years ago, while recovering at home from some surgery, my wife suggested that I purchase a new computer and keep myself busy, instead of annoying her! Having always led a busy and active life, since the time I was about 16, I took her advice, went out and ran the credit card up to the max!

Having got the thing home I spent the next few weeks learning all I could about word processing and computers. Then of course, a few years later along comes the 'world wide web' and email. It was easy to remember the sort of life I had led and how many different occupations I had found myself involved in. I have always thought of myself as a musician first and foremost, but I also reflected back on a life that had been pretty full, I was 38 going on 79!

I jotted down a few highlights, early days as a fisherman, playing in Bands, all leading  to an interesting life, dotted with plenty of life’s rich experiences before my marriage to the hard working Donna, without whom this book would have never been attempted, thanks Mum!

This novel is a work of fiction, although whilst writing it, I kept hearing a few funny voices in my head, telling me what was coming next, as though I had lived all of these experiences, weird.

It has taken a few years to bring the novel out of the archives and into print; I hope you get a chuckle out of this novel

Anyway, enjoy the work, life in is never boring and always exciting, there are plenty of ‘Steve Doyle’s’ out there!

is a rich and diverse country. Stand by for more in the DOYLE Adventures.