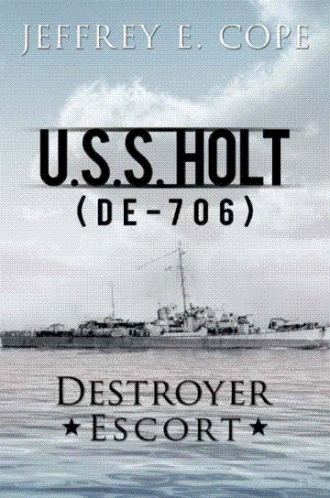 This book is about the World War II destroyer escort named the United States Ship (USS) HOLT whose military hull number was 706. The ship served in World War II from 1944 to 1946 with the majority of the time spent in the around the area. The HOLT had some challenging assignments, including anti-submarine screen for the smaller escort type carriers. It did not have the speed to escort the big fleet carriers, thus the operations were always with the Seventh Fleet, mostly on amphibious operations, ASW (Anti-Submarine Warfare), and convoy escort work.

Much of the information in this book was obtained from the ship’s War Diary, Action Reports, Deck Logs, HOLT reunion newsletters, and from the actual crew members who passed on their stories from their naval days.

Hopefully everyone will enjoy reading about the history of the USS HOLT and what these young men actually went through in World War II to help protect our country.

This is the true story of the men aboard the destroyer escort U.S.S. HOLT (DE-706) during World War II. The HOLT story begins with the ship's construction in 1943, launching in 1944, continues through its missions in the Pacific, and concludes with its decommissioning after the war in 1946. Major missions included Leyte Gulf Landings, a slow-tow convoy to , the Lingayen Gulf Campaign, and the Legaspi Operation.

The HOLT was one of twenty-two Rudderow class destroyer escorts built during WWII. The HOLT and five other destroyer escorts became part of Escort Division 74 and participated in various task groups and units in the Philippine area. Enjoy learning about the ship’s missions and the crew with their many stories as they served their country with valor.

Jeff Cope is a web developer whose father served in WWII on the destroyer escort U.S.S. HOLT (DE-706). After attending a HOLT crew reunion in 2002, Jeff created a website for the ship. The crew appreciated the effort, and since they had previously looked for someone to write a book about the ship, he volunteered his time.