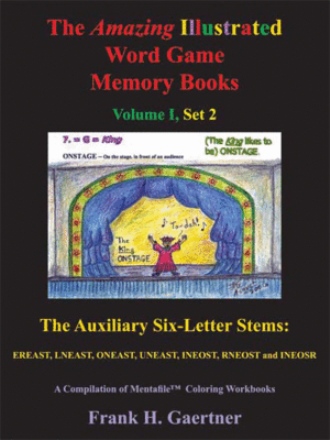 This book, Set 2 of The Amazing Illustrated Word Game Memory Books (The AIWGMB, Vol.I#2), completes the illustrated mnemonic files for the top-ten, six-letter-stems. Also, as explained in detail below, this set of Volume I adds stories and illustrations for the words captured by four other six-letter-stems that can be used in Mentafile™, "on-the-way", letter-management strategy.

The present Auxiliary Set of illustrated stories (Vol. I, Set 2) completes the top-ten and adds four other lists that build word power and bring focus to the Central Seven Six-Letter Stems of Vol. I, Set 1, i.e., the stems that serve as the basis for "on-the-way" strategies that capture all of the acceptable seven-letter words.

About the Second Tier of On-the-Way Strategy

Say one has managed letters well and has acquired the five letters REAST plus a B and H. Knowing the words associated with the five-letter-stem REAST list, would instantly let one know that there was no need to wait for the Central Seven "I" of IREAST or the "R" of RNEAST to make a seven-letter bonus word. As will be seen in Volume II of The AIWGMB, in the B=2=Noah file there are three BHREAST-anagrams exemplified in the story and picture of "Noah taking BREATHS with BATHERS in BERTHAS". Or, alternatively, on-the-way, one might have the opportunity to use one of the Auxiliary Seven of the current set (Set 2). If one has accumulated REAST on-the-way to acquiring IREAST or RNEAST, and drawn an F and E to make FEREAST, a mental look into the F=6=Shoe file of the auxiliary EREAST list would reveal AFREETS and FEASTER as the two playable seven-letter anagrams. That is, in this example, one simply needs to remember that EREAST is a helper (Auxiliary) six-letter-stem for the five letter-stem REAST, and that the code word for F is shoe. Having done so, and having mastered the stories and illustrations in this book, one should be able to instantly recall, in flash memory, the illustration and story of "One of the AFREETS is a FEASTER on shoes".

This set, Volume I, Set 2 of The Amazing Illustrated Word Game Memory Books (The AIWGMB), takes up where Set 1 left off. Set 2 provides additional means for developing one’s flash memory of the Central Seven Six-Letter Stems, as well as means for acquiring a flash memory for an additional set of six-letter stems, referred to herein as the Auxiliary Seven. These seven include four key stems (EREAST, INEOST, RNEOST and INEOSR), i.e. ones the author needed to complete the stories and illustrations of the Top Ten Six-Letter Stems. Set 2 also includes stories and illustrations for three other important stems (LNEAST, ONEAST and UNEAST), which serve as key "on-the-way" supplements to The Central Seven of Volume 1, Set 1. As an added bonus, the makings of flashcards for stories, seven-letter words, hook-letters, eight-letter words and alphagrams for both Sets 1 and 2 of Volume I of The AIWGMB are provided. These cards can offer a quick way to enhance one’s flash memory of all of the seven-letter words listed in Volume 1, as well as a way to bring to the fore game-busting eight-letter complements. Finally, the author’s "on-the-way" word-game strategy, first introduced in Set 1, is described in detail.

Frank H Gaertner is a retired scientist and the author of over 50 research publications and patents in the biological sciences, as well as Volume 1, Set 1 of The Amazing Word Game Memory Books.