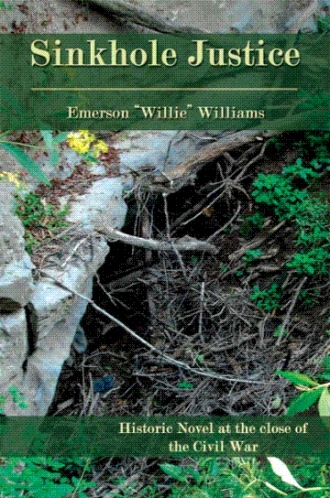 Morgan Eggleston was on the way home from the war. He had ceased caring who would win months ago. He walked off from his unit after the battle of Fisher's Hill in the Shenandoah Valley. They had held their own for a while, actually whipped the Yankees and ran them back down the valley toward Winchester. Then Sheridan came riding up on his black charger and rallied the blue troops to turn around and make a run at the celebrating gray soldiers. Since they had five to every one of the Reb troops it quickly became a rout and this time the Confederates were the ones running. Morgan just decided all of a sudden that he had had a belly full of fighting and just didn't give a shit anymore. As the rest of the Confederate troops went south toward Waynesboro, he went down a side road to the west and within a few minutes the sounds of the army were in the distance. He spent the first night in a barn burrowing down in the hay like a mole. He had been in the army for over two years now and did not see any chance of things getting better for him. He thought of his shack in the mountains and his wife Maggie who he couldn't say he loved but she was warm on cold winter nights and was not against doing the deed with him from time to time.

The next night he caught a chicken and roasted it on a fire in the pines and ate his fill, even saving the legs for later. He fell off to sleep and awoke to the sound of horses galloping and men shouting as they came through the pines toward him. He lit out around the hill as fast as he could run and they still seemed to be gaining on him. His lungs felt like fire in his chest and his side ached as he sucked air in great gulps. He threw down his rifle and seemed to get a second wind as his legs pushed his feet forward in great driving strides. He heard something behind him, even as he sprinted wide open like he never had before. The noise sounded like a wild animal, with deep guttural snarls emanating from behind him. Something slammed in to his back and he went sprawling end over end down the side of the steep bank. He tried to gain his feet again as the growling bundle of hair hurled itself down the hill and again knocked him off his feet. He rolled in to the side of a giant rotted log with the center missing. Trying to cover his face and throat he hurled himself into the rotted opening. His face and head went into the opening up to his shoulders as the gnashing teeth tore into his legs and feet. The power of the things jaws was unbelievable as it clamped into his calves and shins. He could feel the flesh being torn form the bones. He kicked and screamed insanely and his screams seemed magnified to him inside the log. The pressure from the jaws lessened while waves of burning pain cascaded up his thighs in waves.

He felt hands on each of his ankles and he was pulled out of the tree and hurled to the side like a rag doll. Morgan looked up to see the face of the wolf-dog snarling at him with his own blood dripping from its fangs and jaws. It was being held back by a giant of a man with one huge orange eye staring right at Morgan and a socket with skin grown over it where the other eye should be. When he jerked the thick leather collar the wolf-dog tried to turn its head and bite him.

"Down Wolf. Down Wolf. He wants more blood," snickered the giant.

Morgan was thrown over the back of a horse and bounced and puked his chicken all the way to the mountain village where he was thrown into a lean to jail dug in to the hillside. An elderly doctor came to the jail the next morning and bandaged his ribbon cut lower legs and gave him some laudanum for the pain. Morgan slept for days and dreamed of beaches of white sand and clear blue water.

The giant was a sergeant in the Virginia Home Guards.

The Civil War is over and the Lewis brothers return to their homes in Lewis Mill, WV. from the Rebel army. The Winslow brothers from the north are already in Greenbrier stealing family land from the war weary citizens. One of the five Winslows is missing and the others go looking for him bent on vengeance. The missing brother, murder of a leading citizen, arson, two trials and an unmarked grave all lead to suspicion that the sinkhole may hold more than just dead trees and flood waters. Every chapter in this quick moving novel draws the reader into the next and the mystery seems to deepen with each page turned. The mystery is not solved until the final chapter of this thriller, in a twist unusual for nineteenth century based literature.

Emerson “Willie” Williams grew up in Trout, WV. that was known during the Civil War as the village of Lewis Mill,VA. He still maintains a second home in  He is an avid amateur Civil War historian.  His first novel was Roaring Creek, about his g’ great grand father and his brothers experiences in the Confederate army. Sinkhole Justice begins with their return home at the wars end as they begin rebuilding their lives. It can be enjoyed as a sequel to Roaring Creek or as a stand alone novel. Correspondence is welcomed at emersonwms@yahoo.com or 804-784-2210