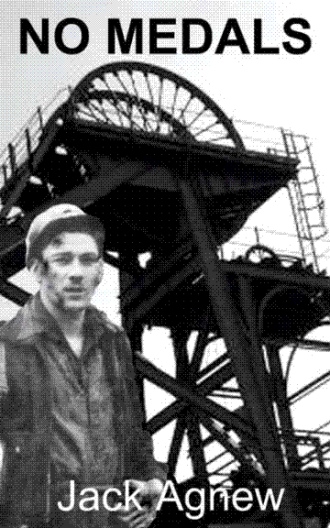 Mr Arnold Withy was a small man of precise, almost birdlike, movements. He wore a boiler suit and, considering himself something of a natty dresser, arranged it so that his necktie and shirt collar showed.  Its  curiously elaborate knot intrigued Martin, who concentrated on it to avoid thinking of the reason he and nine other boilersuited conscripts were gathered at the pit head, heavy lamps hanging from their belts, swinging between their legs and knocking against their knees. Mr Withy was about to conduct them on their first trip underground. Dave must have seen Martin's worried stare and winked to him. The cage suddenly swooped up to ground level and the banksman lifted  the horizontal iron rods that formed, what seemed to Martin, a very inadequate gate on the cage.

'Right, lads. On you get.' said Mr Withy. 'Stand on both sides and keep holding the handrail.' Then came the joke he must have cracked a hundred times, 'Just in case the winding rope breaks.'

Once the banksman had rattled the bars down, there was a pinging of bells and suddenly the cage dropped. The winding engine man was having his little joke, too. No easy descent for these rookies. After falling like a stone for some time, watching the walls of the shaft flash by, the strangest thing happened. Perhaps the winding engine man had changed his mind and was bringing them back up again.

Mr Withy felt it. too, and said,

'Deceleration. We're slowing down. Floor's pressing against your boots.’

The cage slowed and a brightly lit, lofty, whitewashed tunnel appeared. There were tracks with rows of metal 'trams', some loaded with coal. It was all much larger than Martin had expected.'

The onsetter, the banksman's underground equivalent, also had a sense of humour.

'Welcome to Santa's Grotto.', he said, sliding the metal bars up.

During the Second World War Britain was so short of vital coal supplies and coal miners that the authorities offered ex miners in the armed forces the opportunity to return to mining. This offer was a failure, so conscription was introduced. At 18, fit young men, chosen by ballot, were conscripted for underground coal mining and became what were known as Bevin Boys, named after Ernest Bevin the Minister of Labour whose scheme it was.Most of the conscripts had never seen a coal mine. This novel is based on the experience of one of them. Set in a Britain drained by war, it reflects the class attitudes of the period.

Former documentary film maker and college lecturer and now the author of both fiction and non fiction, he has written for both  adults and children. His short stories and articles have been widely published and broadcast. No Medals is his third published novel and is based on his own experience..