A Mandate for Change 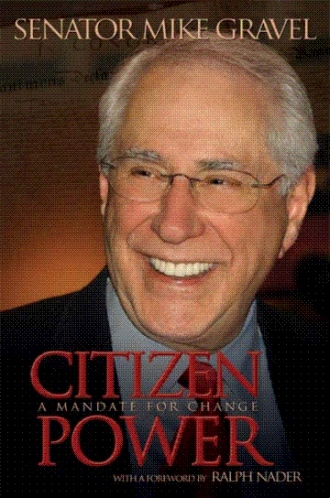 From the Foreword by Ralph Nader:

Like a fresh wind coming from Alaska, the state he represented as a U.S. Senator from 1969 to 1981, Mike Gravel is determined to start a debate about the fundamentals of democracy.

Throughout his work in public service, Senator Gravel has understood that politics is about power—who has it, who should have it, who misuses it, and how it can be used for the betterment of human life here and around the world. He not only understands it, as the cliché has it, he also has walked the walk.

Senator Gravel knows that elections have been commercialized to the point where the very media expectation of candidates is determined by how much money they’ve raised in every quarter. It’s almost like a corporation: What is the quarterly report? Money from commercial interests, such as the drug industry, the oil industry, the nuclear industry, the auto industry, the banking industry, and insurance industries, with their 10,000 political action committees, comes heavily in terms of quid pro quos. They are rarely specific about what they want in return.

Senator Gravel understands what very few candidates are willing to understand and demonstrate publicly. Now more than ever, this country needs a shift in power from the few to the many. He understands that we must make the domination of just about everything by giant corporations a major issue. These giant corporations see no boundaries to their hegemony, to their greed, to their abandonment of our country, to the control of communities, to the infiltration of elections, and to the control of every department and agency in the U.S. government, including the Department of Labor.

For over a decade, Senator Gravel has been engaged in some extraordinary research with leading constitutional law experts about the need to enact another check to the faltering checks and balances—namely, the National Initiative for Democracy—a proposed law that empowers the people as lawmakers. Senator Gravel’s National Initiative for Democracy [NI4D] is the most fundamental proposal I have ever seen or read about by any candidate in any major party in the United States.

What Senator Gravel is conveying to the country is a wisdom embodied in the definition of freedom by Marcus Cicero over 2,000 years ago in ancient Rome. That prominent orator and lawyer defined freedom as a way that forces us to confront its denial or its substance—not its rhetorical flourish by manipulative politicians indentured to commercial and corporate interest. According to Cicero, that definition is the following: “Freedom is participation in power.”

This is the key element that is launching Senator Gravel from one state after another with his proposals. And that could be the mantra for Mike Gravel’s 2008 presidential campaign. 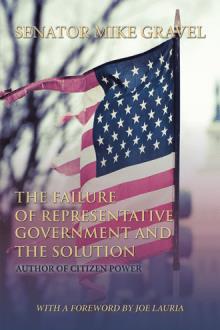 The Failure of Representative Government and the Solution
Senator Mike Gravel & Foreword by Joel Lauria
$13.99

As author of Citizen Power in 1971, Senator Mike Gravel determined that much of what he wrote then is apropos in America today; hence, the release of Citizen Power: A Mandate for Change that reflects the accuracy of his evaluation of problems then, his current position on a number of issues facing America now, and the process that Americans can undertake to become empowered as lawmakers in partnership with their elected officials.

Most chapters of Citizen Power: A Mandate for Change present material from the original book, as well as new information and revised positions. The exceptions are Chapter 2: The National Initiative, and Chapter 7: The War on Drugs. All other chapters cover similar topics in both books, but with the senator’s fresh insights for today’s world. Each chapter ends with how the National Initiative, once enacted, could help solve the problems presented in that chapter.

The Table of Contents is as follows:

Chapter 7 – The War on Drugs

Chapter 9 – The Shroud of Secrecy

Chapter 12 – Who Stole the American Dream?

A 2008 presidential candidate, Mike Gravel served in the U.S. Senate from Alaska for 12 years, from 1969 to 1981. He scored many notable achievements as a senator beginning in his freshman term when, in 1971, he waged a successful one-man filibuster for five months that forced the Nixon Administration to cut a deal ending the draft in the United States.

Senator Gravel is most prominently known for his release of The Pentagon Papers, the 7,000-page secret official document that revealed the government’s lies and manipulation that misled the country into the Vietnam War. The release of The Pentagon Papers and the ensuing lawsuits precipitated the end of the United States’ involvement in that quagmire.

After serving in the Senate, Senator Gravel went on to found the Democracy Foundation, Philadelphia II, and Direct Democracy, non-profit corporations dedicated to the establishment of direct democracy in the United States through the enactment of the National Initiative for Democracy by American voters.