The Yeast of Yerushalaim 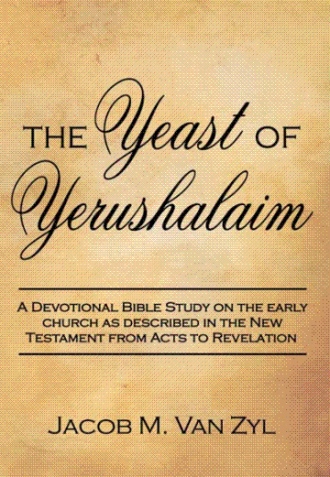 The Yeast
permeates the dough.

"Yeast" has a positive and negative meaning in Scripture, like the "old" and the "new" self of Christians (Eph. 4:22-23, Col. 3:9-10). When the old self dominates, we can be very nasty; when the new self is in charge, we can accomplish much good in life. God wants us to be good yeast with a good influence.

Yeast was forbidden for Israel only during the week long Feast of Unleavened Bread that followed Passover. The unleavened bread reminded them of their hasty exit from Egypt, and it urged them to remove sin from their lives as they removed leaven from their homes (Ex. 12:15-20). During Pentecost, leavened bread was offered to show gratitude for the grain harvests (Lev. 23:17).

Jesus used both meanings of yeast in His teaching. He warned His disciples against the bad yeast (teachings) of the Pharisees and Sadducees (Matt. 16:5-12). The apostle Paul connected with this negative meaning of yeast when he said that a little yeast affects the whole dough (1 Cor. 5:6-8).

However, the positive function of yeast was immortalized by Christ

What did Jesus mean? The fermentation of the yeast creates small bubbles in the dough and makes it spongy. When baked, the soft texture of the leavened bread makes it delicious food. Without the influence of the yeast, the dough will become an inedible, sticky lump when baked. To prevent this from happening when unleavened bread is baked, it is rolled into thin discs, which become crispy biscuits (matza) in the oven.

Before His ascension, Jesus told His disciples that they would be empowered by the Holy Spirit to spread the gospel over the world (Acts 1:8). This statement explained the parable of the yeast. As the yeast is dispersed through the dough and changes its structure in a positive way, so Christians have to be dispersed through each society to spread the gospel and to change views, attitudes, and behaviors by their beneficial influence.

From grassroots level to governing bodies, Christians can have a positive effect by their integrity, wisdom, advice, and example. This good yeast of the early church started its work in Jerusalem when the Holy Spirit came to dwell in every Christian. From there, the yeast of Yerushalaim spread over the entire world.

A prayer: God, make me good yeast in Your kingdom.

A thought: Do I reach others with the yeast of the gospel?

Jerusalem
The city of God

The name Jerusalem, like yeast, is used in both a positive and negative sense in the Bible, showing again that Christians can either fulfill their intended purpose or they can fail to be the salt of the earth and the light of the world. God honored Jerusalem with His presence, but He didn

t hesitate to destroy it when it became unfaithful to Him.

In Hebrew the name of the Holy City is pronounced as Yerushalaim.* It is mentioned in Genesis 14 when Abraham gave a tenth of the loot to Melchizedek, the priest-king of Salem. Both these sages believed in one supreme God and called Him "The Most High." So four thousand years ago God had already chosen Jerusalem as His "home" on earth. A thousand years later king David conquered the city for Israel and prophesied about the order of Melchizedek (Ps. 110). David bought the land where the temple was later built by Solomon. God showed His presence in the temple by fire from heaven (2 Chron. 3:1, 7:1).

The prophets loathed the people of Jerusalem for their unfaithfulness to God, while the psalmists expressed their yearning for the city where they could worship the true God in a special way. Jesus wept over the city

And yet, it was at Jerusalem where the Messiah paid the sin debt of humanity and where He rose from the dead. He ascended to heaven from the Mount of Olives near Jerusalem, and that is where He will return (Zech. 14:4, Acts 1:11). He sent the Holy Spirit into His followers while they were in Jerusalem.

The yeast of God

s kingdom would be dispersed in the world, beginning at Jerusalem (Acts 1:8) and spreading from there to the remotest places on earth. Wherever a new church has been planted, there the yeast of Yerushalaim has come to do its wholesome work.

In this context, Jerusalem is a symbol. It represents the church. Both the church (Eph. 5:22-33) and the new Jerusalem (Rev. 21:2, 9) are depicted as the bride of Christ. She is the woman in the parable that works the yeast into the dough. Likewise, the church enriches society with a positive influence. The "Yeast of Yerushalaim" is the power of God flowing through the church to the world.

We see the early church performing this task when we read the Acts of the Apostles, their letters to congregations, and the Revelation that God gave to the church through the apostle John.

A prayer: Help me to mix the yeast well with the dough.

A thought: Do I represent the good or the bad Jerusalem? 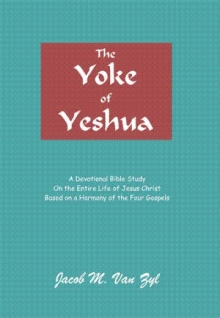 THE YEAST OF YERUSHALAIM.

Jesus said that the Kingdom of God is like yeast. As yeast is worked into the dough and changes its structure positively, so the gospel is dispersed into societies and changes them from the inside. To mix the yeast of the gospel into societies, Jesus sent His disciples out to make disciples of all nations: "You shall receive power when the Holy Spirit has come upon you; and you shall be witnesses to Me in Jerusalem, and in all Judea and Samaria, and to the end of the earth"

Jerusalem is pronounced Yerushalaim in Hebrew. In this city Jesus was crucified, raised from the dead, and ascended to heaven, and to this city He will return. In Jerusalem, the Holy Spirit came into the hearts of believers, inspiring them to spread the gospel worldwide. The Acts and letters of the apostles show how the yeast spread throughout the Roman empire in the first century. When the yeast of Yerushalaim has done its work, Christ will return to renew heaven, earth, and Jerusalem.

By several series of events, God steered Jacob to people who impacted his life. A passing doctor saved his life at age nine. Someone offered him an interest free loan to study for the ministry. He and his wife met when many lines intersected. He became co-pastor with a former student-friend. In that church, someone directed him to the clinic where he served as pastoral counselor for 25 years.

A colleague of Jacob’s wife opened opportunities in Canada. The request of an elder led to many sermons in local churches. That spawned the writing of three devotional Bible studies. The Yearning of Yahveh covers most of the Old Testament. The Yoke of Yeshua harmonizes the four gospels and tells the whole story of Jesus. The Yeast of Yerushalaim covers the New Testament from Acts to Revelation. Through these books, Jacob guides the reader through the entire Bible, one page a day.