Hidden Meanings and Picture-form Language in the Writings of G.I. Gurdjieff

(Excavations of the Buried Dog) 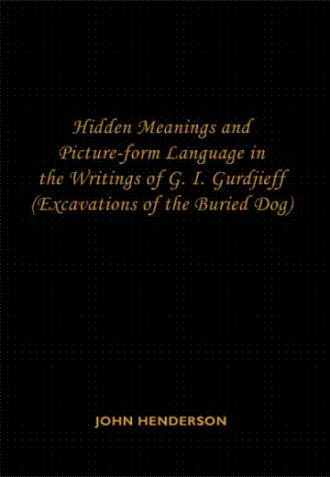 Recalling Gurdjieff’s intent for his first series: “To destroy, mercilessly, without any compromises whatsoever, in the mentation and feelings of the reader, the beliefs and views, by centuries rooted in him, about everything existing in the world.”

For years Gurdjieff’s followers have been working, reading, struggling to understand his writing.  We are like miners chipping away at the rocks of his books, seeking the dog he so carefully buried.  That “dog” has been waiting patiently to be disinterred, but we have been digging with the wrong tools.  A few new “shovels” and “picks” which may be helpful are suggested in this book.  They are here for the taking; use them as you will.  As a word of caution, though, be careful when you pull the dog out.  He can be, at times, a bit wild.  And let’s face it, he’s probably hungry after fifty years underground.  That is to say, that dog could jump up and bite the legs right out from under some of your more treasured beliefs – or it might even bite you somewhere dearer.

The purpose of the second series is “To acquaint the reader with the material required for a new creation, and to prove the soundness and good quality of it.”

It is a ripening of time.  The seeds of Gurdjieff’s Picture-form language have been planted for over five decades, and are now ready to burst through the soil of our Psyche to reveal the holographic images of the messages he intended for us.

And the purpose of the third series: “To assist the arising in the mentation and in the feelings of the reader, of a veritable, nonfantastic representation not of that illusory world which he now perceives, but of the world existing in reality.”

“And with regard to languages (Russian and English),”  Gurdjieff said, “both these languages are like the dish which is called “Moscow Solinka,” and into which everything goes except you and me, in fact everything you wish and even the after dinner chesma (veil) of Sheherazade.

And from behind that veil Gurdjieff’s hand now reaches to pull back the curtain, enabling us to see, if we will but open our eyes to the images hidden behind the words, the esoteric teachings of the ages through which all things become possible.