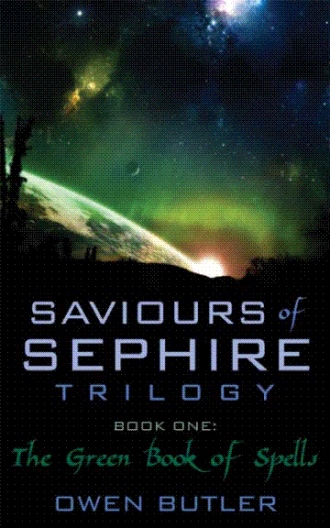 "Welcome, to the planet that is called Sephire.  This is a world that is held within a distant universe. Linking devices called portals are located on the planet’s surface. Once activated they have the ability of transporting a person into an entirely different galaxy.

The inhabitants of Sephire arrived through using one of the linking devices found on Earth during the period of the cave men.  When the ice age threatened mans existence, they sought refuge through the portal and began to form civilizations on the unknown planet.

Once the forever winter began to thaw on Earth, many of the people returned to their home world, but there were some who decided to remain on Sephire and became the race of humanoids. Over the coming of years humanoids populated the planet living in peace and unity.  Then one day a tall dark cloaked figure appeared through an unknown portal located in the rocklands of the north.  The shape of the person appeared to be human but its face was bright white and had fiery red eyes that glowed in darkness.

Those who were unfortunate to cross the strangers path were eliminated by the long sharp blade that he carried.  The frightened humanoids in the north, fled for the safety of the capital.  Word quickly spread amongst the scattered villages and towns of the dark menace.

Once news reached the governing council of this danger, emergency meetings were held to decide upon an appropriate course of action. The humanoids are a peaceful race had not encountered any battles before, therefore the governing council decided to send one humanoid through the portal to Earth and ask the humans for their assistance."

Saviours of Sephire follows the path of a Welshman called Robert and six of his companions.  Having found themselves within a storm at sea they seek refuge upon an unknown island and enter a cave only to discover a mysterious device, which pulls them into a wondrous planet called Sephire, where the race of humanoids face extinction from evil forces.

Guided by a spiritual being, Robert and his friends establish that they have been summoned to Sephire to help the humanoids restore their freedom.

In order for the prophecy to become fulfilled and to learn of a passage that can send them back home, the Saviours of Sephire experience fear, wonder, love and despair.

This is the first story written by Owen Butler.  He has recently completed a story of a Cornish smuggler as well as a science fiction novel, which will hopefully be released in the non too distant future.