The Memoirs of Margueritte Clarida Alexander-Goodwin 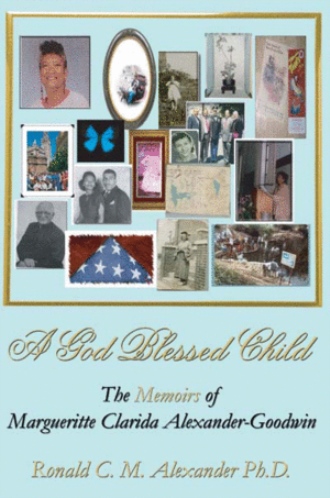 Margueritte continued her attendance in church. Along with some of her schoolmates, Margueritte enthusiastically served her God and church. She did choir recitals, was a secretary for Sunday school, worked with the youth group, and helped with both Christmas and Easter programs. Once, she was selected to do the part of Mary, for the Christmas play. She was back in her world, a culture that she trusted so much. Margueritte looked forward to finishing the eighth grade and, afterwards, staying home for the traditional summer vacation. Yet, Margueritte’s tranquil life was seriously startled when her Mom received another saddening telephone call. The call had come from a town in Georgia. A relative was telling her that Margueritte’s brother, Henry, had suffered from a gun shot wound and had died. No one could possibly imagine the idea of rushing to visit your sister and brother, but able only to attend the brother’s funeral. Such a tragedy took an awful lot of energy away from Margueritte’s inner peace and patience. Such a misfortune would be difficult for even older folks to comprehend. Again, how many knowledgeable persons even tried to imagine the thoughts of a young adolescent girl, living in the southern states, of the United States of America in the late 1930’s. Now, there was her brother whom she would never get to know. The official report had indicated that Henry and his friend had gone into the woods to hunt. They had gone off to hunt many times before. Unfortunately, their playful behaviors caused them to make a terrible choice. They had decided to wrestle. The weapon that they used was a double-barreled shotgun. It was told that the weapon was carelessly placed next to a tree. Their falling against the tree caused the gun to fire. Margueritte’s brother, Henry, was struck in the chest. The rounds penetrated his thoracic cavity. The wound stopped Henry’s heart. (The “mystery” within Henry’s life and death would surely affect Margueritte, her family, and her future generations.) When Margueritte and her Mom arrived, they were led into their relative’s home. Henry’s overalls were hanging on the door, illustrating the tearing holes and dark blood, where the metal balls had pierced his heart. The funeral was held in a small church in a wood. The hearse was an open wagon. Horses were pulling it. It was high off the ground, with black curtains around it, like a stagecoach. It was a traditional funeral. Prayers were said but, in Margueritte’s heart and mind, there would be an absence. She would always miss her dear, absent brother. Once the funeral had concluded, Margueritte, with her family and their friends, continued their procession, returning to Henry’s house. Turning away from the day’s sorrowful mood, Margueritte took time to visit with her older sister, Nell. Time and distance had separated them, but blood is thicker than water. Eventually, Margueritte begins to offer her sister some soup while she rested in bed. She had been consumed by the pain of her brother’s death and was not able to attend the funeral. Suddenly, Mom Elsie rushed into the room. She began to tell Margueritte that it was time for them to return home. Margueritte did not know the reason why she was being rushed away from her sister. They had just begun to be acquainted, laughing and talking as sisters can only do! Not until they were home, did Margueritte find the real reason for their sudden departure. It seemed that Aunt Mary, Nell’s and Henry’s guardian, was talking about having Margueritte stay with them, which any one could correctly guess, was a big “No, no!”

"A God Blessed Child" uncovers the multi-tiered layers of Gladys Alexander-Goodwin, during the era of personal, analytical and post-industrial transformation in the United States. Now available in paperback, this easily read manuscript includes illustrations, documents and photographs. The text instructs, informs and comforts young and mature, non-expert and professional. The syntax of this book provides solutions for Americans and other nationals who continue to make great efforts to include self-achievement with family development, religious and community activism and world-view. This book shares an insight into the culture and social fabric of the United States and the interactions of family members determined to have a respectful and accomplished life while citizens under certain, established nullifications. The book presents strong aspects in Social Science, Education, and Government.

Writing History and in other genres has thrived under Ronald’s apt pen. At William Penn University, he took an English scholarship and wrote for its newspaper. In 1967, he met Dr. Martin L. King. Ronald listened to Dr. King’s speech while taking a seat in a college theater’s balcony. Several months later Ronald wrote and spoke the eulogy to the University’s student body. As an administrator for the I.S. 201 Independent School District in Manhattan, New York Ronald wrote specifications for Federal, State, and Local educational programs. Next, he entered Howard University to pursue a doctorate in History. To complete his research, Ronald entered the United States Marine Corps. In 1977, with the approval of his mentor at Howard, he completed the subject of his dissertation: “Pattern For Victory - The United States and Asia 1945-1976 and Beyond”. As evidenced in international decisions and violent conflicts on the Asian continent, Ronald researched historical markers that indicated a replication of data for a period exceeding three decades. Professor Adam Ulam, professor of history and international relations at Harvard University, referenced the same examination of events in Foreign Affairs Magazine of Autumn 1985. A reader can find a petition in the Congressional Record, 101st Congress, November 1999 that supported a National Day of Recognition for those killed in Lebanon on 23 October 1983 in the bombing of the Marine Corps Barracks, during the current Post-Pattern Era. At the State Department, President William J. Clinton quoted this work during the Harry S. Truman Dedication on 22 September 2000. “Harry Truman's unmatched insight allowed him to see emerging patterns in history, to identify new challenges over the horizon, and to build the institutions and approaches to meet them. Thanks, in no small measure, to President Truman, we have won the Cold War…”