… And Other Tips for Overland Treks Around the World 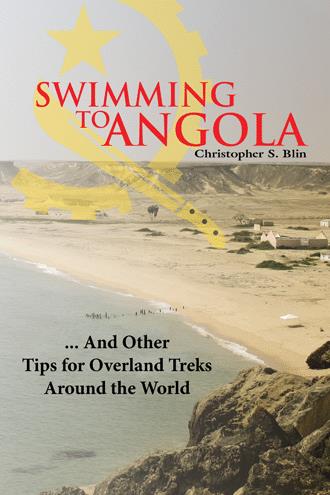 The time was February of 2002, the place Namibia, in southwestern Africa. I had just made it safely through the country and gotten to the border with Angola, located just to the north. But between here and the next step of the journey stood a border guard -- one of the fraternity that world travelers come to know as the ultimate gate keepers for any movement to and fro. These fellows usually don't present themselves as helpful, which is only because they aren't there to be helpful. Instead, they are usually there to give you a hassle, or possibly pick up something for their back pocket in the process.

This one played the role of the stone wall. "Sorry sir," he said, "this is a war zone."

There had been a civil war raging in Angola for three decades, but I assumed they would allow at least some tourists into the country. I assumed wrong. They were not giving out any tourist visas, at any price.

I like to go places where there is action, and am not generally scared off by war zones. After all, are people trapped in the ravages of war any less of human beings? In my experience, having been in countries torn by violence, refugees of war -- those breathing the stench of death, rousted from their homes at a moment's notice, being caught in crossfires they have nothing to do with -- are the very people who need affirmations of hope and reassurance that their lives still mean something. I wished do some kind of goodwill work in Angola. Right now, though, it seemed good enough to at least leave my footprints there.

Little did I know that this was possibly the worst time to tempt the country's wariness about outsiders, given that tensions were running particularly high. An insurgent leader was killed in combat with government troops, and there was grave concern about minefields and an outbreak of the Marburg virus.

Driving a little farther until coming upon the Okavango River, there was a little beach area on its banks. I pulled onto the hard sand, near where some people were washing their cars, and looked across the river. Could this be my 'back door' to Angola? The river was only something like 100 yards wide, but it wasn't a calm river by any means. It had rushing water, not quite like rapids, but a quick current just the same. Still, I am a good swimmer and had been through strong currents in the Amazon.

A local man happened to be sitting there, obviously looking for something to do. When he saw this big white guy approaching, one could read his mind: there's got to be some money here somewhere. I then got the idea of paying him to watch the car while making my foray into Angola.

"Is this water safe?" I asked.

"Okay, great. Do you mind watching my car while I swim?"

While stripping down to my trunks, I gave the mission some thought. Swimming straight across, the current would certainly pull me down-stream far away because it was that strong. So when diving in, to the amazement of the people on the shore, I had to start swimming into the current, and swam basically at a 45 degree angle. Swimming as hard as possible would compensate for being pushed sideways by the current.

But I was never in any real danger, and made it across to the Angolan side in a matter of minutes. I finished pretty much straight across from the starting spot on the other side. Looking around to make sure there weren't any border guards waiting with guns drawn, I found instead there weren't many people around at all. Trading some souvenir coins with the locals was my main activity, being only in a pair of trunks and not able to wander around very far.

Having cheated the Angolan interdiction against tourists, I wasted no time going back across the river before someone could get wise, utilizing the same maneuver: swimming against the direction of the current as it pushed me down-stream. But because of fatigue, I was pushed past the beach area into some reeds which line the sides of the river. These reeds were a good six feet tall and quite thick, and cut off any movement to and from the river. A perilous situation, indeed.

I was standing in about four feet of water, with the water up to the chest and rushing at me. Knowing drowning was a possibility if unable to extricate myself, I grabbed the reeds hand over fist, pulling myself into the oncoming current. It was only about 15 yards, but I pulled myself back to the safety of the little beach area. Just then while wading ashore, another local man who was washing his car looked a bit surprised to see me.

"You're a brave man," he remarked in English, "you could have been a crocodile's breakfast."

I said, "A man told me earlier that this water is safe."

He explained, "Oh yes, it is safe -- here at the beach. But down there by the reeds, that's where all the crocodiles live!"

I thought, gee, thanks for that critical bit of information -- which had been offered just a bit late. Needless to say, it is good to get a consensus of opinion before doing something on impulse. One man's idea of safe is another man's peril. The postscript, as I found out later, was that there had been nine deaths on that very section of beach -- all having been eaten by crocodiles! I might have been number ten if luck hadn't been kind.

"Christopher Blin is truly the real-life Indiana Jones of our time!  His insightful first-hand views of world conditions provide humorous and often jaw-dropping commentary for readers and listeners alike."

***
Christopher Scott Blin is an international consultant who graduated with a Business Management degree before going overseas for further studies in Munich, Germany and Latina University in Panama.
Having visited over 95 countries around the world, highlights include working at hospitals in Africa, shelters in Central America, and even playing basketball in the leagues of Australia -- where he enjoys dual citizenship.
Christopher regularly gives keynote speaking addresses on the subject:: "Surviving an Overseas Assignment in a Developing Country."