The War of Angels 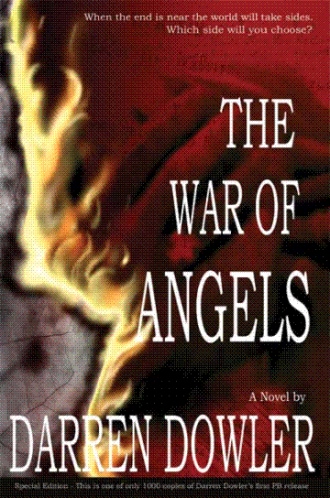 Charlie, with hopes of wetting her nervous mouth, turned and grabbed her Coke off of the shelf behind her. Turning back, she sucked in hard, her vocal chords releasing a guttural sound, her Coke falling from her hand, as if in slow motion, shattering on the ground, spraying all over her legs. The stranger, in those three or four seconds, had not only completely changed his attire, but everything about himself. His hair was now short and black, slicked back. His white robe had become the entire ensemble on the front of the magazine. He was the image from The Matrix—black, shiny leather and vinyl from head-to-toe, a futuristic, full-length Asian duster topping the ensemble. Charlie was so astounded, yet so terrified at the same time. A cold, unnatural feeling filled her being. She even noticed a strange taste in her mouth from the fear-induced chemical changes in her body. “What…are you?” she asked, her voice quivering. “Do you really want to know?” She wasn’t certain if she did, but she figured she’d come this far. “Okay.” “You’re sure?” She hesitantly nodded yes. The stranger studied her for a moment. “I am what you humans call an angel.” “That’s really freaky…but extremely cool. Are you here to hurt us?” She felt a cool, tingling shiver run down her spine, surprised at her own candidness. “Depends who you ask.”........................................... A young boy ran down Broadway as fast as he could. He saw an infant girl curled up beside her mother who’d been mercilessly gutted by one of the flying demons. Picking the girl up, he continued toward shelter, a subway entrance only a block away. One of the creatures fell next to him, crumpled on the ground. Another literally pushed an old man through the pavement as it fell directly on his head. Looking upward, he saw the outnumbered white angels courageously battling the black. They were fighting and falling everywhere. Holding the crying child in his arms, he spoke to her as he ran. “Don’t worry, I’ll protect you. Don’t cry!” he said, trying to comfort her. A Fallen spotted the boy as he ran toward safety. Smiling with vile hatred for the inferior humans, he dove down, flying straight for him, talons outstretched. As the young boy continued running, he felt razor-sharp claws dig into his back as he heard the evil laugh of the creature................................ Michael acknowledged them with an embrace, and the group of angels continued toward the doorway to the most sacred ground on the face of planet earth. They had arrived at the Place of the Skulls—the very Church that housed not only the bloodstained ground of the Crucifixion, but the tomb that held the body of the most influential man that ever walked upon the earth. They had come to Golgotha......................................... As they swept down like giant eagles toward one another, they rolled in mid-air, locking up in a stalemate embrace. They again fell toward the ground, tumbling toward a large, man-made structure below, colliding into the earth with a hard crash. They were both quite dazed after the harsh blow from the brutal fall. Michael, not able to climb to his feet right away, spotted Lucia, who was having the same difficulty. This time, stunned, they both stood very slowly, a cloud of dirt, debris and dust enveloping them from the tremendous collision. It created a large dense cloud neither could see through. Many of their followers had arrived and began to alight on the perimeter of the large structure they’d fallen onto until every available space had been filled all around its center. They could not see their revered leaders as the immense cloud billowed outward toward them, swallowing them in its thick diameter. Some standing, some sitting, some perching as birds, they all waited to discover the outcome of their leaders’ fates before resuming their own battles. Hearsay was being spread of the offer Michael had made in the Aedicule. Others whispered of Lucia’s fear to face Michael, while others claimed Michael dead. After several moments, as the dirt and dust slowly settled, Michael and Lucia could vaguely make out each other’s outlines in the thick haze. Looking around, as the dust cloud thinned, they took in their surroundings, realizing where they had fallen. Both recognized it instantly. It was a place where evil and death and man’s inhumanity had reached their all time heights in the history of the world. A place which held significant meaning for both of them. Where man had proven without a doubt that God and the Devil existed within him. Kings had sent a million men to their death here. And warriors had become immortalized in the minds of men. These two, the first of all gladiators, had landed in the ancient ruins of the great Roman Coliseum. 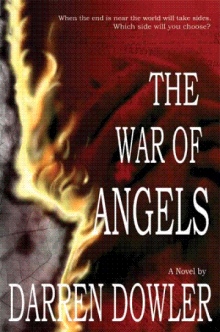 A story of adventure, friendship, love, betrayal and war. "The WAR OF ANGELS" takes us into a magical existence where heaven, hell and earth become one canvas for this epic story. Archangels, led by Michael and Sataniel (Satan) collide once more with the fury of the heavens, with man and earth trapped between they and their armies, their futures hanging on the outcome of the battle. Three SETI scientists capture a satellite photo of the arrival of a mysterious being that has the power to alter man’s future and change the course of the world. On a remote Italian mountainside, the ancient secret order of monks known as the Montiarans encounter a visitor (The Archangel Michael) whose presence could mean peace for the world or the end of days. Michael, while searching for his enemies, unknowingly risks all when he falls in love with a human woman, Charlie. Lowering his defenses and assuming temporary human form to be with her, he is mortally wounded, trapping him in his human state.. Leading his army now will surely mean his death. But the warrior summons his remaining strength and courage and charges onto the battlefield. Earth. Millions upon millions of Angels clash, destroying everything in their paths. The world explodes into mayhem as the stage is set for the largest battle the earth has ever seen and whose outcome will herald a new era for man. Will the days to come be the foretold thousand years of peace? Or is it the dawn of the rule of the beast? When the end is near, the world will take sides. Which side will you choose? “And then night came upon the earth and the sun never again touched the face of man.” www.DarrenDowler.com www.RockandRolltheMovie.com www.myspace.com/DarrenDowlerMusic www.myspace.com/TheWarOfAngels

Author (THE WAR OF ANGELS), film director/screenwriter (ROCK AND ROLL THE MOVIE - 2010), actor (HANCOCK/EAGLE EYE) and international recording artist (THE RIGHTEOUS BROTHERS, PAUL REVERE AND THE RAIDERS, THE LETTERMEN and THE BACKSTREET BOYS) Darren Dowler is a true modern renaissance man. You can learn more at www.DarrenDowler.com, www.PaulRevereandtheRaiders.com, www.RockAndRollTheMovie.com, www.MySpace.com/DarrenDowlerMusic.