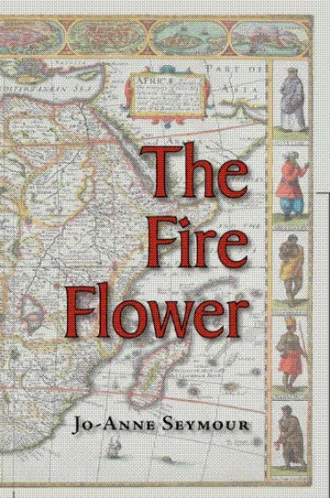 "As the ship carried him towards the end of his journey, in surprisingly fair weather for the treacherous and unpredictable African seas, Sir Nicholas Young felt his deflated spirits rise and he had a strong sense of optimism about what lay ahead. It was the thirtieth day of June, 1676 and Nicholas, grateful for the respite after nearly ten weeks of travel, breathed in the fresh wind and felt his face dampened from the revitalising sea spray.

Turning to his gardener apprentice, he clapped him on the back of his flapping linen shirt, filled with the deposits of salty sea air from his days on deck, and said with a loud burst of enthusiasm, 'Robin, we will make a great discovery and our fortune! I'm convinced we will find something really special! This is, after all, the Cape of Good Hope and my hopes are very good, indeed!'

He was pleased to see his master so confident, especially since it had been such a long and arduous sailing from London and Sir Nicholas had taken to his bunk, with sickness, on several occasions.

‘I’m very glad you made it up on deck, Sir. This is a fine welcome to the Southern Lands!’ Robin added; his light voice almost drowned out by the creaking of the ship’s timbers and the loud shouts of docking preparation between members of the crew.

He smiled his response and placed his hand, companionably, on Robin’s shoulder. They stood side-by-side, watching buildings and then people, gradually grow and come into focus, the height of the solidly-built master barely a couple of inches taller than the long, slender frame of the young apprentice.

Nicholas’s loose dark hair whipped around his face and shoulders in the sea breeze and he reached back and tucked it into the collar of his shabby brown wool travelling cloak.

As the new stone fort, still under construction, came into sight, Nicholas was surprised to see such a bustling and vibrant community. ‘I had no idea so many people lived here, Robin. It’s not even twenty-five years since the East India Company decided to put down proper roots in the area and build a real town….but look at it!’"

Following the loss of his inheritance in the English Civil War, Sir Nicholas Young is reduced to making his living as an impoverished plantsman. In 1676, he sets out for Africa and discovers a priceless new bulb, The Fire Flower, which will make him a very rich man….but only if he can prevent anyone else from getting their hands on it.

The Fire Flower attracts the attention of King Charles II and draws Sir Nicholas, somewhat reluctantly, into the life of the Royal Court, where he becomes entangled in a turbulent relationship with the beautiful but perplexing Grace du Caveny.

A prize as valuable as The Fire Flower soon earns Sir Nicholas many enemies, putting the lives of everyone around him in danger and, unwittingly, involving him in the war between France and Holland.

Jo-Anne Seymour has published various academic papers and articles.  She currently works as the Deputy Headteacher of a boys’ grammar school in Kent, England.  Prior to becoming a teacher, Jo-Anne worked for several years as a graphic designer and she is a keen plant artist.  Jo-Anne has begun work on a sequel entitled The Crown of England.