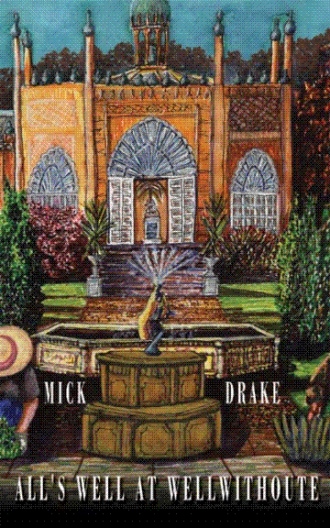 In his now tranquil bed, Harold reawakens with a start to find himself alone, he had been dreaming a strange dream, in which golden cows leapt from a bridge into the abyss far below, his mother, clad in white glowing raiment, remonstrating with his father who was encouraging the beasts to jump.

`Why are ye so misbegotten as to cast asunder the sacred beasts of the temple my husband? What secret sorrow maketh thee take the part of the Philistines?`

`Get thee gone from whence thou came` spake lord Frederick most exceeding wrath, pointing his big staff at the offending cattle.

`You`re going to regret spaking thus!` brayed the head cow, her udders swinging ominously, `Remember what happened to the followers of Baal - or your loins may be transfigured for fifteen seasons.`

`Away with thee and smite not the fatted calf ` spake lady Nora,` for these are my chosen ones and I desireth not that they should leap into yonder abyss, and another thing, it`s about time you consummated their purchase with yonder tally man.`

`Speak not to me of filthy lucre!` spake Frederick, even more exceeding wrath, giving the head cow a poke with his staff for good measure, `I shall not pay a single groat for yonder beasties - do not darken my bridge again without the proper authority!`

`Hows about a Papal Bull? `  queried Cis who had materialised wraith like from out of the shrubbery.

`That will do nicely! `  replied the head cow pushing forward against Harold who had somehow joined the remaining cows on the parapet.

Harold fell over and over, twisting and turning, landing face down on his pillow with a thump.

Harold gives himself up once more to thoughts of his mother and father, propping himself up in bed to avoid more disturbing dreams.  His hand inches its way down his winceyette pyjamas until he reaches a large lump in his crotch and twiddles away industriously until the transistor radio he habitually keeps there bursts into life, dispensing Desert Island Discs into the cool morning air.

The radio in his crotch serves two important and unconnected purposes. The first of which is to protect Harold from the perils of self- abuse, which had been a major preoccupation of the authorities at his boarding school, as well as the pupils, although each group was approaching the subject from different ends of the spectrum, so to speak.  The second was to provide Harold with a source of popular music, which became undetectable once he plugged the miniature earpiece into his ear, enabling him to while away the small hours listening to Radio Luxembourg in the dormitory.  The miniature earpiece was no more, fatally attacked by the mice he had kept in a cage by his bed, dragged in by its slender wire and eaten in mistake for a corn- husk.

Wellwithoute, the ancestral home of the Dangwell family and the only mock Moghul mansion in Great Britain, set in the midst of the unspoilt Cheetlinshire countryside, is in deep financial trouble.  Surrounded by creditors, the bank unwilling to extend its overdraft facilities, the spice businesses upon which the family built its fortune, a distant memory.   Lord Frederick Ferdinand Dangwell is at the end of his tether.  To add to his woes, her majesty`s government have removed his hereditary peerage and his elder adopted son Gordon, who is something big in the city, is unwilling to risk any of his substantial fortune to save the estate.

Lord Dangwell`s only faint glimmer of hope is that his younger son Harold can somehow be persuaded to marry Veronica, the poetic elder daughter of Lord Rodney Jeremiah Entwisle, the rudest and richest man in Cheetlinshire.  Lord Rodney is desperate to rid himself of Veronica who is infecting his wife with literary yearnings, and is prepared to pay a substantial sum to Lord Dangwell if he can successfully arrange a marriage convenient to the two scheming lords.

Lord Dangwell`s wife lady Nora, is too preoccupied with her restoration of Wellwithoute`s extensive gardens to take any notice of the financial crisis surrounding the estate.  The housekeeper, Cicilly Hindmarsh, whose abuse of the English language is only equalled by her misuse of kitchen implements as she prepares delicious meals for her favourite lord, stands helplessly by as Harold is drawn into his father`s web of intrigue.

Harold Hepelwhite Dangwell is a failed artist with a chequered past and an even more chequered future, who has recently completed an art restoration course and is on the lookout for his first substantial commission.  He is inveigled into Entwisle Hall on the pretext of restoring a portrait of one of lord Entwisle`s ancestors. To lord Dangwell`s delight Harold is a hit with both of lord Entwisle`s daughters, but trouble beckons as the sisters jockey for position, the portrait is damaged beyond repair, and Harold is banished from Entwisle Hall seemingly forever.

Against all expectations the picture and Harold`s reputation are restored, and Harold somehow becomes engaged to Veronica Jasmine Entwisle, resolving to go through with the marriage to save the Dangwell estate from financial ruin.  Harold`s best friend and best man Chestall Tate, his sister Rosemary, and her two lively twins, disapprove of the match and hatch a scheme to scupper lords Dangwell`s and Entwisle`s carefully laid plans.

Following eventful Stag and Hen parties, the drama reaches its climax in the small Norman chapel at Mavis Enderby, presided over by the Reverend Lionel Goodfellow, a born again vicar with high church affectations and a penchant for old religious texts.  The wedding ceremony is underway and the Tate family are preparing to disrupt the proceedings when an intervention comes from a most unexpected direction.

Mick Drake was born in the West Midlands and grew up in Sutton Coldfield. After leaving school he followed a career in retailing before gaining a degree in fine art. Finding it impossible to make a living as a budding artist, Mick returned to retailing, managing supermarkets for several years before leaving to set up a conservation scheme in Wolverhampton and joining local government. After he gained a degree in management studies, Mick and his family moved to Lincolnshire where he works in Economic Regeneration encouraging the development of businesses in the county.  Mick lives in Lincoln with his wife, children and grandchildren and can often be found in the garden or on the golf course.  Mick is currently writing a sequel to All`s Well At Wellwithoute – his first published novel.

Cover illustration by Mick Drake (his art came in useful after all!).