From Time To Time 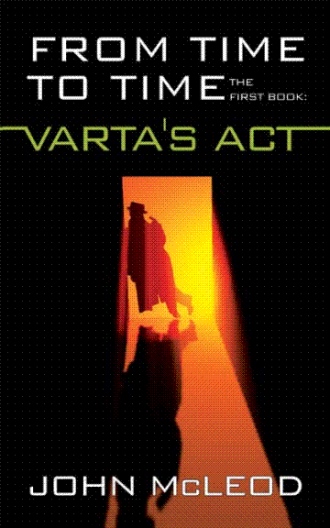 Nathan stood in the middle and waited.

He heard a humming above him but he didn't look up. He had to remain perfectly still.

A mechanical arm descended and wrapped itself around his body. It fit him perfectly. It held him upright as it lifted him off the floor about two metres. It then slowly propelled him forward towards a wall at the other end of the room. As he neared the wall it opened up slowly. The arm carried him through and then the walls closed behind him. This room was an intense red and the lightening bolts flashed this way and that trying to hit him but were unable to do so. The arm stopped and waited as the electricity in the room abated slowly and then came to a complete stop. He could hear it through the walls behind him.

The arm started up again. He was carried towards another wall that opened up to let him enter. As he passed through the gap he came into a room that was as big as three jumbo jet aircraft hangars. This was the area that contained the cube. This was the place that would send him back to the past.

The arm carried him across the vast expanse. The walls were grey. He could only just see the floor below him. As the wall closed behind him it also shut out all the noise. The sudden silence rang in his ears. He could hear his heart thumping against his chest.

In the distance, situated in the centre, was the giant glass cube. He could see the cables coming out of every point and disappearing into the corners of the hangar. The cube was as big as a house.

As he got nearer he could see there was no top to it. When he was positioned directly over it the arm lowered him until he was placed in the middle of the cube. A tube descended from the ceiling and started to fill the cube with a dense, light blue liquid.

Nathan always felt an overwhelming loneliness at this point. It was a hard feeling to control. He tried but the isolation was just too great. The fact that you were immersed in liquid and nobody was near to help you, only amplified the sensation.

As the fluid reached his waist he felt a sudden cold explosion in his stomach. This was the pill taking affect. It was timed to go off at this precise moment. What it did was give the body enough oxygen to breathe while it was submerged in the emulsion. The cold rush he felt was the oxygen sweeping through his body.

Thick liquid was rising over his head now. He could feel his whole body floating. The emulsion was an electricity conductor that, at the same time, was designed to protect the body. It also had the right density so that Nathan could float in the centre of the cube.

The fluid stopped at the top of the cube. Nathan floated comfortably in the blue liquid. Then the arm disengaged itself and disappeared back to where it had come from. The hose that was filling the cube also detached itself. The glass top to the cube descended from the ceiling. It attached itself and Nathan heard a squelching noise as the remaining bit of air was sucked free.

Now he really did feel isolated and alone. There was no other quiet like the one he was experiencing now. It was so peaceful he could almost fall asleep.

He knew he wouldn't though.

What kept him awake was the vibration he was starting to feel. The reactors were gearing up to full power. Soon, all the energy from sixteen giant nuclear stations would be aimed directly at him. For a whole two minutes, enough energy would be thrust toward him to power the Island of New Capricorn for ten years or more. It was a sobering and quite frankly, frightening thought.

Nathan tried not to think about it.

He heard a rumbling and the vibrating increased tenfold. He could feel it coming. Every molecule in his body was reverberating. Every fibre of his being, including his thoughts, could feel the intense energy that was building up. The eight cables that were attached to the cube were humming like giant tuning forks. The nuclear reactors were at full power and were now concentrating their collective energy towards Nathan. For two minutes there was a power in that cube that rivalled no other in human history.

Lars Nathan is an ordinary man doing an ordinary job. He wakes in the morning and goes to work like any other normal person. However, one of Nathan's colleagues has gone rogue. Nathan is given the task by his superiors to hunt down and bring back his co-worker who also happens to be a friend. This will be Agent Lars Nathan's most difficult assignment yet and will determine his future with the Agency.

You see, Nathan works for the TTA. A government agency dedicated to stopping people from escaping to the past. Nathan is the best they have and he must use everything at his disposal to bring his friend back to face his destiny.

John Mcleod was born in and has spent some time living in and . He has had a variety of different jobs but feels most comfortable telling tales. He has written several short stories but this is his first attempt at a fully fledged book. His main interest lies in science and action. Two things that join together in this and future books in the series.