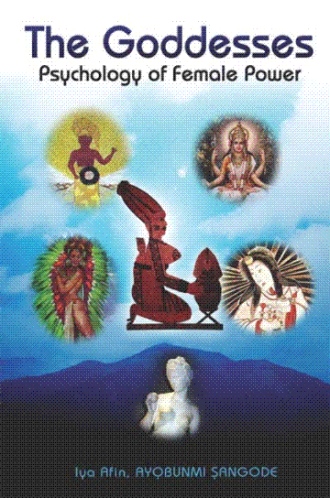 CHRISTIANITY, JUDAISM, and ISLAM regrettably have chosen to affix “GOD’s” Sex as MALE. Its NEGATIVE Impact On WOMEN, has been Well Documented by many authorities on FEMALE SPIRITUALITY. However, it would be False to attempt to affix “GOD’s” Sex as FEMALE, and then using the term “GODDESS”. For the term “GODDESS” Is A WONDER IN HER OWN RIGHT (as we shall see in this book). SHE is not to be equated with THE ABSOLUTE – OR The Formless, Sexless Transcendent Vision of “GOD”. There also seems to be found an Uncertainty (ambiguity) which occurs with MANY Other PRINCIPAL AFRICAN DEITIES that are said to be MALE, FEMALE or ANDROGYNOUS: NANABULUKU and MAWU-LISA (FON); ODUDUWA and OBATALA (YORUBA); NYAME (ASHANTI); OBOSOM (AKAN); NZAMBI (BA KONGO); MA-WAMGA (BA SOGA), just to name a few. The Opinionated EUROPEAN so called “authorities" on AFRICAN “SACRED WISDOM”, Particularly Most of The Older Ones ‘Insisted, Imposed, and COLORED The Information They Found’. The Earlier WRITTEN ACCOUNTS of “ORALLY” Transmitted BLACK AFRICAN Mythology, DID NOT Come From Professional Mythologists, Anthropologist, or Ethnographers Rather they were Provided By MISSIONARIES and Their Disciples and Students, Explorers and Adventurers. Almost All were MEN, Almost All were CHRISTIAN, and Almost All Had BIASES and motives through which Their Recording of AFRICAN MYTHS Were Filtered. CHRISTIAN DOGMA Predisposed Them to ‘Find A SUPREME CREATOR Who Was, MALE’, Even When Th e AFRICAN ACCOUNT MAY HAVE BEEN OTHERWISE..............................................................MOST Books on MYTHOLOGY, tell of The Adventures and Legends of The “MALE” GODS in Their Cultures. There are a FEW MYTHS that tell of The GODDESSES, and a VERY FEW that Include AFRICAN GODDESSES. My Prayer is that, You Enjoy This SMALL Selection of MYTHS and LEGENDS about Th e GODDESS In AFRICA, and Will SEARCH To Find MORE “Traditional” MYTHOLOGY About “Th e AFRICAN GODDESSES”.................After AFRICA, we come to The MYTHOLOGY of The GODDESSES of Other NATIONS and CULTURES. We will see that some of Their ANCIENT GODDESSES Were Patterned After The ANCIENT AFRICAN GODDESSES, Especially Those GODDESSES of ANCIENT BABYLONIA, PHOENICIA, INDIA, GREECE and ANCIENT ROME.

My Work is Glorifying The Female Forces; "The GREAT MOTHERS", and The DIVINITIES "OSUN", "YEMOJA", and "OYA".  This Book Focuses On These "FEMALE FORCES" and Some of Their COUNTERPARTS In OTHER PARTS of The WORLD.

I Choose These "THREE" DIVINITIES because in The Culture of My People, The "FON" of DAHOMEY (Republic of BENIN), and Also The "YORUBA" of NIGERIA, These THREE DIVINITIES Represent The "THREE STAGES In A WOMAN's LIFE"; and because MY WORK is Focused On The "SPIRITUALITY" and The "PSYCHOLOGY of WOMAN". To UNDERSTAND "WOMAN", You Must Understand The "SPIRITUAL FORCES" Behind Them.

In This Book, The SECOND in this Series, I continue not only with These Three DEITIES, but ALSO The Introduction of TWO AFRICAN POWERS that The "FON" and The "YORUBA" People say are, The FEMININE CREATIVE "GOD" FORCE.

Iya Afin, AYOBUNMI S. SANGODE is a PRIESTESS in Her Culture

‘A MANUAL For Young African American Women, Medicine Women, Priestess, and More Mature Women Of Spirit’; and Also “THE CULT OF SANGO”.

She is The Artist “SOSI” whose Spiritual and Traditional African Art can be seen in many homes and Shrines from Florida to California, and also in The Traditional “African Village of OYOTUNJI”, in The Sea Islands of South Carolina where she has Exhibited Her Paintings

in Museums, Festivals and Shows with the Artist Group “OMO ISONAS”, meaning the “Worker of The Royal Art”.

She is a 62 year old Mother, Grandmother and Wife of a CHIEF and BABALAWO (A High PRIEST, ORACLE of “IFA”), and as an AFRICAN-AMERICAN, She has had a Unique Experience being able to Practice Her Culture in America for over 37years.

As a PRIESTESS in Her Culture (Initiated in 1974 to The DEITY “SANGO” in Los Angeles, Ca.) She has been a TEACHER and TRAINER of PRIESTS, with a Masters Degree and Ph.D. in PARA-PSYCHOLOGY (Spiritual Psychology) from the “AFRICAN THEOLOGICAL ARCHMINISTRY” and Now Spends Her Time LECTURING on WOMEN’s SPIRITUALITY, SOCIETIES, and RITES Of PASSAGE;  and Writing and Painting and working on a New Book, The Third in this Series on “The Psychology of Female Power”,  where she resides in North Carolina.