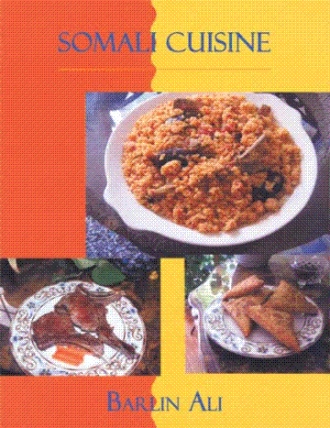 This Somali cookbook is the first of its kind. These recipes represent traditional ways of food preparation and cooking that were for centuries transmitted orally[1] and practically by generations of Somali women: from mothers to daughters, elder sisters to younger sisters, aunts to nieces, grandmothers to granddaughters. To this extent, the recipes recollected in this book also represent an aspect of female history that captures Somali ways of living as maintained by and through generations of Somali women.

Inside, you will find recipes for preparing all types of classic Somali dishes – from the exotic Somali tea to the appetizing sambuusi.  Your culinary skills will sometimes be tested in preparing delicious Somali dishes like anjero with maraq bilaash.  There are seventy recipes in all with over ninety colorful pictures that not only introduce a variety of Somali dishes, but also demonstrate the techniques to assure success.   Although traditional cooking methods are described, all the recipes have been adapted for the modern American kitchen.

The book is divided into seven sections, from appetizers to desserts.  In addition to the instructions on how to prepare the recipes, suggestions of what dishes compliment each other are included in most recipes.

Although the influence of where the author was born and grew up is apparent in the descriptions, names and terminologies used in this book, all Somalis in the Horn of Africa and those non-Somalis who have visited the area can relate to the dishes contained in this cookbook.

[1] The Somali language was only spoken until the early 1970s.