A Wholistic Analysis of the African American Experience, 1441-1994

by Gyasi A. Foluke 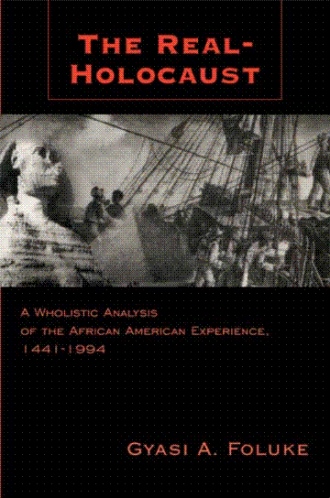 In The Real-Holocaust—a title adapted from the well-known phrase “the real McCoy”—the basic premise of the author is that Americans have underestimated the damage inflicted upon the nation, especially African people, since the beginning with the European-Arab slave trade in 1441, and continuing to the present era. Simultaneously, we have underestimated the level of commitment required, in both financial and human resources, to solve our perennial, often ugly “race” problem that has created “a great racial divide” in America. Accordingly, the author documents a “guesstimated” 300 million deaths of African people during this nearly 500-year period of history, a figure that may be contrasted to the well known and much better publicized holocaust of World War II, the latter a major tragic event, involving deaths of a “guesstimated” six million Jews.

An author-lecturer-consultant, nontraditional Minister (Cosmic Christian), and part-time CEO of The Kushite Institute for Wholistic Development in Charlotte, NC (http://tkifwd.tripod.com/),  Minister (Dr.) Gyasi A. Foluke has been an activist-scholar-author in the struggle for human rights and dignity for over 50 years, beginning at age l6 when he established the first Youth Council of the NAACP in his hometown of Columbia, SC.. As a senior high school student, he also wrote the Alma Mater for . Having written many professional articles, monographs and studies to promote social-institutional change in America, he is the author of The Real-Holocaust: A Wholistic Analysis of the African American Experience, 144l-1994 (1995),* The "Old Time Religion": A Wholistic Challenge to the Black Church (1997),** The Crisis and Challenge of Black Mis-education in America: Confronting the Destruction of African People Through Euro-centric Public Schools, (2001), The Scoundrel Syndrome: Essays on the African American Experience, 1996-2003, Revisiting The Real-Holocaust (2004) and A Wholistic Freedom  Agenda:  Practical Remedies for Racial Justice, Beyond Empty Rhetoric, With a Special Focus on Charlotte-Mecklenburg  North Carolina (publication pending) .

A former Air Force Officer/Intelligence Analyst who was evaluated as “a consummate expert on race relations matters” at the Armed Forces Staff College (1972), he served subsequently as Chief of Training, USAF School of Social Actions and, later, as President/CEO of several nonprofit corporations, including the Tarrant County/Forth Worth anti-poverty agency and two Affiliates of the National Urban League, creating or managing over 50 socioeconomic programs for “disadvantaged” citizens. He was a non-traditional Air Force Officer, having spent most of his off-duty time working in the civil rights movement, including brief work with Dr. Martin L. King Jr. in l963. He also opposed the war in in l967 and paid a price for his moral-professional posture.  A recipient of numerous awards for community service and winner of the Bronze Star Medal, he is listed in Who’s Who in Black , 1985.

**To be reconstructed under a modified title after being stolen by a bankrupt publisher.