How Peggy Learned about ALZHEIMER’S and Can Papa Ben Play Ball? 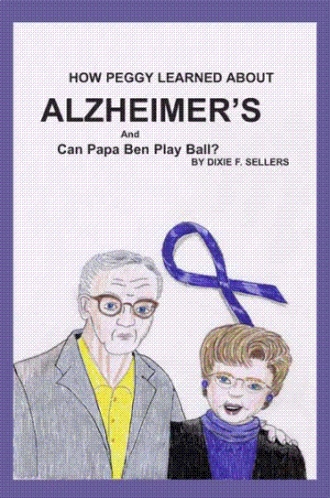 On a pleasant June day, Jason wed Lily at the church where Lily attended with her parents.

The family  members had been in several of the wedding pictures and started mingling amoung the wedding guest.

"It was a beautiful wedding, Mabel," complimented Peggy as they watched the crowd about the couple in the reception hall of the church.

"The dress is lovely.  The mother-of-pearl beads on the bodice blends well with the ribbon in her bouquet," said Peggy.

They caught sight of Ben and Ed across the room and made their way toward them as they greeted some of the guests.

"Have you had any cake and punch yet?" asked Mabel.

"I'm always ready for something to eat,"  Ben stated.

"Let's get some punch and cake," said Mabel motioning toward the linen covered table which held the punch bowls, cake and condiments of nuts and mints.

A month later when Peggy was preparing a dish for the Fourth of July picnic, Ben went into the kitchen and asked his wife to button his shirt sleeves.

"Why are you dressing up, Ben?" Peggy asked as she laid the knife down on the counter to button his shirt.

"Ben," said Peggy trying to get his full attention.  "The wedding was last month, remember?"

Peggy wondered why she even spoke the word 'remember'.  She knew that was the problem.

Peggy went to the linen closet and removed some towels, unfolded them and put them in a laundry basket.  She asked Ben to fold the towels for her.

When Ben had finished folding the towels, Peggy took them toward the linen closet only to unfold them and returned the same towels to Ben to fold.  He soon forgot about the wedding and Peggy finished her dish for the picnic.

A person with Alzheimer's can be distracted from what he or she is doing at the time by giving them another task to do.  This redirects the brain to focus on something other than what is causing the misunderstanding.

This is the first book (2 in 1) for me. The book has a section in the back explaining the disease in a simple way to the great grandchild.  It can work for any small child with questions about a person with Alzheimer's.

This book is about a modern day subject, a growing disease called Alzheimer's.  There are 4.5 million people with this disease now and it is growing rapidly.

A lot of people have had to learn about this sad disease the hard way as did I.  There is a need for more people to learn as much as they can.  You will either have a family member get this disease or will know someone with it.

It is not a disease to be afraid of but it will help you and them if you know how to respond to certain responses, statements or subjects of their choosing.

There comes a time when you need to get help from an assisted living.  It may even be necessary to put them in a nursing  home.  This book takes you through both facilities and when Peggy thought it was time for each.

Each case is different, but each has a lot of similarities.  Support groups are a lot of help.  This book tells about my case and what I learned.  There is so much more to learn and situations which I did not have to face.  Your case will be different.

I only hope this book helps you in some way.  I have added some helpful hints at the end of some chapters.  I learned a lot of my hints from people in my support group who care for loved ones with this disease.

May God bless each caregiver.  You are a VIP in their life.

The Author, Dixie F. Sellers was born in as Dixie Ann Fitzpatrick.  She moved to Franklin Co. at age 7 and graduated from in and Fugazzi School of Business in   She also attended in for one year.

She got married and got a baby boy as Dixie McFarland.  She worked at financial banks, and got divorced after twenty-two years.  Nineteen years later she married Roy M. Sellers, a fine Christian man she had known for twenty-two years.

Since has been interested in art all her life, it brought her to the place to sketch the cover page and the childs’ portion in the back of this book.  By creating fictional characters, she has written this book to tell you how she learned about this disease.