Behind the Copilot Seat

An Enlisted Mans Perspective on Flying with Student Pilots-USAF 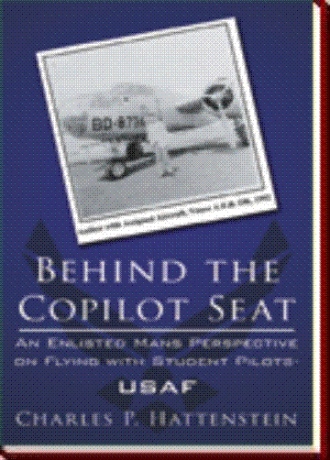 After becoming a flight engineer, I would occasionally be detailed to the cadet area to perform "mess check" at the cadets dining hall, which would give me an idea of cadet life on the ground, and as an engineer later, in the air.  I would sit at the door and count heads as the cadets came in. They would march up to the door and come in single file to the tables, stand at attention and after all had taken position, sit in unison. I could see the strict discipline they were under when some  cadets would be required to eat a “square meal”. They would  have  to sit at the table, at attention, throughout the meal. Looking straight ahead, each would pick up the fork, and without looking at the plate, get food on the fork, lift it straight up over the plate to a point directly in front of their mouth, and then bring it straight to the mouth. It would be the reverse when they returned the fork to the plate to put more food on the fork. I guess this and other kinds of discipline they went through could be tolerated if one wanted to get into the cadet program, but for the time being I was content to do the type flying I would be doing.

There were always several flight training classes at Vance that overlapped with one another. While one class was close to graduation, another class would be in the early stage of flight training. I would fly one day with experienced trainees and maybe the next day with beginners, and we would go through the same routines all over again. It kept the job from getting boring.

We had a scheduling board in the line shack with the aircraft numbers posted. Each aircraft scheduled to fly that particular shift would be entered on the board with the name of the engineer scheduled to fly. Since most engineers flew with their own aircraft, those were the names entered. My name was always put with my aircraft.

A building behind the line shack contained all the parachutes that were used by the cadets and engineers for the North Stage. I would usually pick up my parachute before the cadets arrived. Before signing for the chute, I would check the inspection record to ensure it had a current  inspection documented, check the ripcord pins to make sure they had not slipped out, and the overall general condition. Since I would not get the same parachute each time, I always had to adjust the straps to fit.

If I was on the morning shift, I would have already performed  a pre-flight check on  the aircraft, ie: run the engines, checked all systems for proper operation and made a walk-around inspection. Then wait for the flight crew to come out. Each flight would normally have a crew consisting of an Instructor Pilot (IP), two cadets and an engineer, or on some flights, two cadets and an engineer, if the cadets had already soloed, or the first solo flight.

When the cadets began flying the B-25, they would have to learn the flight characteristics and all emergency in-flight procedures. We flew four hour flights; One cadet would fly for two hours and the other cadet for two hours. We would fly as many flights as necessary during each phase until the IP thought they were proficient enough to start another phase.

After the initial familiarization flights, the next phase would give the cadets ample practice in handling the B-25 during takeoffs and landings, either at Vance, at another Military Base, or an auxiliary landing strip. We would generally stay in the traffic pattern and make full stop and touch and go landings. We would experience all types of landings during this phase. There would be hard landings, bouncing landings, landings short of the runway and landings where we would float down the runway and seem like we would never touch down, and no flaps landings when the aircraft would touch down at a much higher airspeed.  But the landings would get smoother as the cadets gained experience.

The book is about the experiences of a Flight Engineer flying with Aviation Cadet/Student Pilots during their training in the United States Air Force.

Aviation Cadets/ Student pilots in the USAF go through a stringent training program to become rated pilots. In the 1940s and 1950s two of the aircraft used for their training were the T-6 for single engine primary training and the B-25 for multiple engine training. Vance AFB, Enid, Oklahoma was one of the bases for B-25 Training.

The crew of the B-25 during the training phases consisted of one Instructor pilot, two students and one enlisted man, the flight engineer. Or two Students flying solo, and one Flight Engineer. The flight engineer flew daily four hour missions with the students, with or without the Instructor and was present throughout all phases of their training. It was required by regulations that the engineers go on the training missions to evaluate any mechanical problem that may arise and to either advise or correct the problem in the air or on the ground. Flight Engineers prevented many aborted missions due to mechanical problems. He also sometimes acted as observer during some missions

The Engineer sat behind the copilot seat in the cockpit and observed all activities in the cockpit. He saw the actions of the students, their abilities and sometimes their mistakes, and the instructions given by the Instructor to help the student through some procedure that the student was having trouble with. He knew that most of the students he flew with would graduate, and also knew that some of them would wash out of the program.

The author's career in aviation spanned a period of thirty-seven years, six with the USAF and the rest with the Department of Defense. Most of the positions during that time were non-flying positions, except for the six years in the Air Force Training Command as a mechanic and flight engineer on B-25 aircraft engaged in pilot training.

All of the aircraft he was associated with were military aircraft, and from all the Armed Services; The Air Force, Navy, Marines, Army and Coast Guard. He had hands on experience with over twenty different military aircraft, jets and propeller driven. These included Trainers, Fighters. Interceptors, Bombers and Cargo aircraft.

He retired from Government Service after a very rewarding career. Now engaged in activities such as painting, writing, and with his wife of fifty-five years, traveling and collecting. He has also previously published a book "All Roads Lead to Citronelle". The book describes life in Citronelle, Alabama in 1902 when the town was a popular tourist and health resort for tourists from the north. "Roads" in the book refers to railroads.

After many years working with aircraft he says he still gets a thrill when an aircraft flies overhead, even if but for a few minutes.