A Guide To Personal Growth And Consciousness 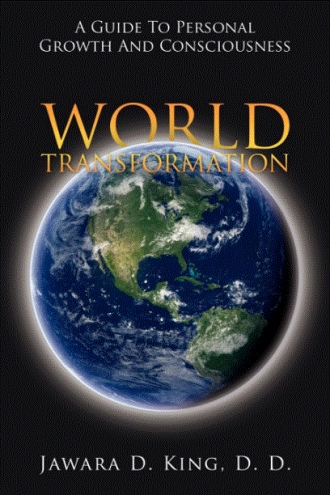 What Is the World?

Religion does not know what the world is. Christianity defines the

personal Lord and Savior. It is also defined as not living in line with

the Bible and doing what the unrighteous do. The world is viewed as all

live. This same formula is used by almost all of the other religions of

the world. Organized religion defines the world as those outside of

their belief structures and how they live as a whole. The world refers to

unbelievers and their way of life. Anyone who doesn’t believe in, follow,

the world. The world is always viewed as those who will perish, while

The world is really the world of thoughts and emotions. When

definition of the world, they are talking about the sense perceived world.

which is the world of form. The world is not a group of people who are

not living by an organized religion’s holy book, it is the sense perceived

The Bible does have some universal truths in it underneath all

the religion. Even though the characters and stories are mythological,

non-historical, and modern versions of earlier writings by various

cultures, spiritual lessons can be learned through some of the content.

Jesus are not fully understood by Christians. When Jesus says, “I have

overcome the world,” he was not referring to worldly power. He was saying that he transcended the world. The world had no power over him

as it did over others. When the Bible says to be in the world, but not of

the world, it doesn’t mean don’t do what non-Christians are doing, it

means to not lose yourself in the world of things. The church teaches

that abundant life is a life of an abundance of worldly possessions. They

more abundantly.” He was not talking about an abundance of consumer

goods and material possessions, but an abundance of the depths of life.

Abundant life is going deeper into what you already have in life, not adding more things.

To truly be in the world but not of the world is to not lose yourself in situations, thoughts, possessions, and circumstances.  A worldly person is not someone who doesn't live in line with a holy book.  A worldly person is someone who has given all their power to the world of form.  Power is not having a position where you rule over other people.  True power is within you.  People give the world of form power to make them happy or unhappy.  Everytime a form dissolves, they are devestated.  As the forms come and go, they are controlled by the circumstances as if the circumstances are the puppetmaster.  Nothing in the world of form should have the power to alter your state of consciousness.  Being worldly is identifying with your thoughts, making a false self out of your possessions, and being attached to the situations and circumstances of life.

You overcome the world by transcending the world. To transcend the world, you have to not take your thoughts seriously or believe everything in your mind. Situation

Human unconsciousness, which is identification with thought activity, human emotions, and the thinking mind, is the only source of ALL the evil on planet Earth.  All evil is the result of humanity living in darkness, not knowing who they are in their essence, beyond their earthly names and physical forms, which causes them to identify with the world of materiality.  The only solution to the darkness of humanity is the light of consciousness, which is disidentification from egoic mind structures, going with the flow of life instead of fighting against it, acceptance of what is, and surrendered action.  As we continue to transform individually, the entire world is transformed, because in essence, we are all ONE. Each ONE affects the whole, causing World Transformation through the concept of ONENESS by way of the ONE spiritual energetic force that moves through ALL beings.

All organized religions were created by men to condition the masses to think in a certain way, or to point beyond religious belief structures to the Infinite, the formless consciousness we call God. Accepting organized religion as the absolute truth instead of relative truth is the foundation for division and the destruction of the planet. Without the transformation of human consciousness, humans will destroy themselves, each other, and the planet, and are already doing so.  If humanity continues to blindly believe the media, organized religion, and all the conditioning tools of the powerful ruling Elite who run the world, without doing their own research, they will be destroyed through lack of knowledge.

World Transformation: A Guide To Personal Growth And Consciousness is a transformative book that discusses over 110 life-changing topics to help spiritual seekers in their journeys in consciousness. Learn to be the awareness that is aware of and doesn't become all that you observe.

World Transformation begins one person at a time. As you change, the whole world changes, because you are a part of the ONE Consciousness. Gandhi said, "be the change you want to see in the world." As you follow his advice, you become a positive force in the world.

"One of the most important books of this generation!"

"One of the most profound spiritual books ever written!!"

Humanity will destroy themselves if they continue to blindly believe and follow the media, politicians, and organized religion, which are all used by the ruling Elite to control the masses.  Most humans don't know what's going on because they allow entertainment, the media, and other brainwashing tools to control their thinking. Mark Twain said, "in religion and politics, people's beliefs and convictions are in almost every case gotten at second-hand, and without examination, from authorities who have not themselves examined the questions at issue, but have taken them at second-hand from other non-examiners, whose opinions about them were not worth a brass farthing." Social, religious, and other forms of conditioning control the minds of humanity and will destroy them if they continue to accept ideals without analyzation.

It is a fact that none of the major religious figures of organized religion actually existed.  Their historicity is an unverifiable opinion.  Daniel Patrick Moyniham said, "everyone is entitled to their own opinion, but not their own facts." The existence of all the Saviour Gods are questionable.  Humanity only believes in them because of religious conditioning.

Humanity as a whole has lost their identity in the world of materiality, also known as the world of form, or the world of things.  To identify with something means to mistake a person, place, or thing for who you are, the I AM before I AM a (teacher, lawyer, doctor, student, etc.)  Humans have confused millions of forms for their identity.  Your invisible indestructible eternal divine essence is consciousness.  Common false identities humans mistake for who they are in essence are their jobs, cars, degrees, attractive spouse, belief systems, relationships, knowledge, physical appearance, education, clothes, jewelry, family history, brand names, social status, special ability, thoughts, residence, awards and achievements, race, religious or political affiliations, sports, music, and MILLIONS of other things in the external world.

"Hello World! I am Jawara D. King, the writer of writers and the light at the end of the tunnel. There is NOT ONE human being alive that will not benefit from reading my book. Thank you."

Ask questions or speak with Jawara King at: jawaraking@yahoo.com

Jawara King is a full-time author, teacher, and lecturer in the metaphysical and spiritual fields. He is a counselor and spiritual teacher working with groups and individuals in . Jawara gives talks and leads workshops all over the conducting retreats, intensives, and training programs on world transformation, religion, personal growth, and consciousness.  His transforming central message is based on a wide spectrum of ancient wisdom teachers and contemporary spiritual luminaries, and combines spiritual, scientific, governmental, economic, educational, and social elements.  World Transformation is filled with mysticism and activism, with an unparalled depth of clarity & insight.