The Hopewell Journey: 350 Years from Immigrant Religion to Hoosier Faith 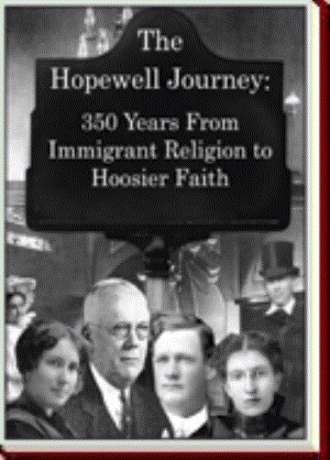 The settlement of Hopewell, Indiana began in 1823 when Simon Covert stumbled upon Big Spring during a hunting trip. This constant, clear-flowing spring is sheltered by a rock house five miles west of Franklin along the south side of a wide curve in State Road 144. The shelter’s multi-color stones were brought here by glaciers thousands of years ago. Those glaciers moved south from Canada bringing those stones and larger rocks, boulders, leveling hills in their path and crossing two states and half of Indiana. The shelter, a partially open-sided structure, stands over Big Spring near the former Franklin Township School, 701 West State Road 144, that is referred to as Hopewell School. The huge cottonwood tree towering over the highway, on the north side of scenic State Road 144, is believed to have been “witness” to the activities of Native Americans and then the area’s Caucasian settlers. George King arrived in the county first. Simon Covert and Thomas Henderson followed with their young families. Many other families living on the American frontier in Mercer County, Kentucky came north to join them over the next several years. The majestic cottonwood tree still is a “witness” to history being made in Hopewell, a community that continues to thrive. Indiana was established as a state in 1816. Its capital was Corydon, 90 miles south of Franklin, but on a few miles north of the Ohio River. The state’s first capitol, a stone building, centers the town square. However the central part of Indiana still was a wilderness.

“The Hopewell Journey: 350 Years from Immigrant Religion to Hoosier Faith; Hopewell Presbyterian Church 1831-2006” is the story of devout European Christians who sailed from The Netherlands for the New World in 1651 in search of freedom – mainly freedom in the way they worshiped God. That group of Lowlands Dutch, French Huguenots and English settlers reached Nieu Amsterdam (New York). Before long, they swore allegiance to their new country but struggled to preserve their Dutch language, way of life and worship. When their closely-knit group of descendants began feeling hemmed in, families moved en mass in the early 1700s to New Jersey and, a few years later, near Gettysburg, Pennsylvania, developing the Conestoga wagon. In the late 1770s, families again packed up, loaded their wagons and traversed valleys in the Appalachian Mountains into Kentucky where they settled 5,945 acres sold to them in 1786 by Daniel Boone’s brother, Squire, ancestor of two Hopewell Church members. Their final move began in 1823 when Simon Covert discovered Hopewell’s Big Spring, ending an almost 300-year saga with a permanent settlement west of Franklin, Indiana. This book also celebrates the farming community encircling Hopewell Presbyterian Church, founded May 23, 1831. Fourteen families, descendants of those founders still worship at the church, live here and farm or work elsewhere. Once established in a Johnson County area comparable in size to that in Kentucky, the settlers never again moved as a group. Only a few continued west – to establish churches, serve as ministers (almost 20), as missionaries (three) and to seek gold. Historians look at the Hopewell settlement and its accomplishments as the one most like the immigrants’ vision of what their community could and should be. Indiana pioneers overcame severe hardships in a tangled wilderness; prospered and their children built notable houses, five of which enclose original log dwellings. Their descendants engaged in innovative farm practices; some were inventors. Illustrated stories of and by those people, their homes, their lives and Hopewell events continue the immigrants’ “journey” to the present. Everyone’s story is different and interesting.

Kathleen Van Nuys loves history and writing. She gets that from her paternal grandfather, Ira M. O’Banion, co-founder of The Tipton Daily Tribune in 1895. Only one link in a four-generation newspaper family, she began working at that small Indiana town paper during junior high school. After receiving a Bachelor of Arts degree from Indiana University, Bloomington, with journalism and history majors in 1943, the author was a copywriter in Chicago. In 1945, she returned to work as reporter/editor at The Tribune and, over several years, handled page make-up, wrote headlines, learned to set type and operate a linotype machine, passed paperboys’ routes when they failed to show up and often accepted customers’ classified ad payments on errands downtown. To meet The Tribune's V-E edition deadline after World War II, she well remembers working an 80-hour week. During a two-month 1948 seminar tour of Europe, Kathleen and her sister, Mary Jane, dispatched daily stories about travels and talks with government leaders that The Tribune published. Marriage to Charles B. Van Nuys brought her to Hopewell, west of Franklin, Indiana, in 1956. She became a columnist/reporter for The Indianapolis Times' Women’s Department in 1957, covering the city’s social activities. The Times closed in 1965, but she took the same position at The Indianapolis News, retiring in 1995. Interviews led her to three generations of Winston Churchill’s family, Rev. and Mrs. Billy Graham, two First Ladies, a few senators and dozens of “500 Mile” races. Among the columnist’s awards over 55 years are two Community Service Council plaques for stories of women’s groups that raised major funds for prime Indianapolis projects. Kathleen has a deep appreciation for the historic area where she lives and counts herself fortunate to have traveled to 45 foreign countries. PS from Kathleen's son John Van Nuys: My mother spent 5 years writing this book. Few churches and rural areas have had their histories recorded in such detail -- and with such love. My mother loved Hopewell. I hope reading this book helps you remember Hopewell -- or fall in love with Hopewell, too.