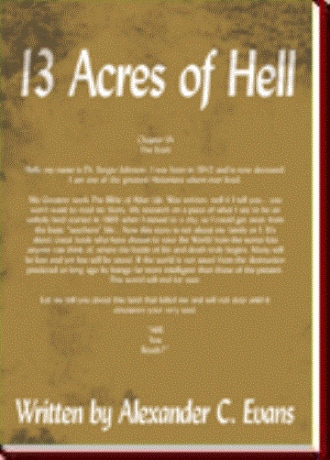 Hello my name is Dr. Sergio Johnson. I was born in 1842 and is now deceased. I am one of the greatest Historians whom ever lived.

My Greatest work The Bible of After Life.  Was written, well if I tell you... you won’t want to read my Story. My research on a piece of what I see to be an unholy land started in 1865 when I moved to a city, so I could get away from the basic "southern" life... Now this story is not about my family or I. It's about Great Souls who have chosen to save the World from the worse fate anyone can think of, where the battle of life and death truly begins. Many will be lost and yet few will be saved. If the world is not saved from the destruction predicted so long ago by beings far more intelligent than those of the present. This world will end for sure.

Let me tell you about this land that killed me and will not stop until it devourers your very soul.

but then we found what seems to be a sacrificial room were blood was everywhere, odd enough there was fresh blood

Dr. Lindsey walked over and looked down

“ It looks like it was just performed about… two days ago”

“ I-I don’t know” he spoke with an uncertainty thick enough to cut through.

We began walking, through this underground hell. It seemed to be endless it was as black as night, the only light was the small light of a flashlight. The stench was unbearable. We heard what could only be described as cries of so many lost souls. I started to turn back.

But it was as if something, or someone was calling me on. I guess I then understood my obsession. Dr. Lindsey stepped on what appeared to be a trap. We heard a click noise and a huge hand like claw came down

The heavens had a plan and so did a demon. It takes a mortal to save all of life itself. A Unknown Doctor finds a artifact that will change the life we all know forever. This artifact, a book composed of skin containing the lost souls of all who has made contact with it.

Alexander C. Evans is known by many small local Neighborhoods in Chicago. as a bright, smart boy. At the age of 14 he started a novel to express the unique thoughts of a creative mind. Nicknamed the Doctor, and others. At the age of 17 he finished his first novel. 13 Acres of Hell