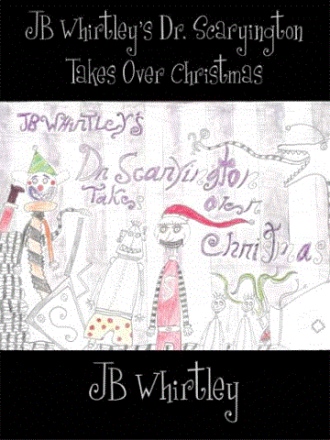 When Dr. Scaryington is up in his gloomy mansion, while reading a horrible murder tale by Edgar Allen Poe, he finds a chapter about a holiday called Christmas. He reads about a strange man riding on a sleigh with eight tiny reindeer and who gives presents to children all over the world. Dr. Scaryington gets an idea to make Christmas a better holiday. Although, after kidnapping Santa Claus and taking hostage of all the elves, along with giving children nightmares, Christmas becomes a disaster.

This story draws on the dark tradition of Tim Burton’s The Nightmare Before Christmas with the look of the artwork from Dr. Seuss’s How the Grinch Stole Christmas—JB Whirtley style.

JB Whirtley’s Dr. Scaryington Takes Over Christmas is the first book that he’s ever written; he never intended in getting the poem published.

When JB Whirtley was eleven-years old, at school, he was in an art class and actually drew a gruesome, funny-looking character; which turned into the book’s main character, Dr. Scaryington. He got the idea of the story from old horror movies and other books, such as: How the Grinch Stole Christmas, A Christmas Carol, and mostly from Tim Burton’s film, The Nightmare Before Christmas.

JB Whirtley was born and raised in ; a world in which the artistic, JB, was not in step with the bright, happy people surrounding him. The author is also a member of the . Like any normal thirteen-year-old, JB, enjoys playing tennis, soccer, skateboard, and sometimes basketball. He also loves to write poems, paint, and draw. He loves to watch horror movies and is a huge fan of Tim Burton (Corpse Bride, Beetlejuice, and Batman).