The Light in the Wilderness

How Religion Has Led the World Astray 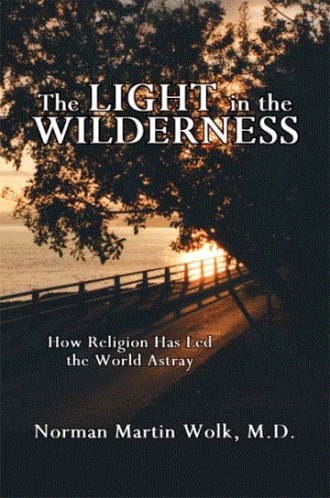 [The MAN Almost No One Knows]

A little over 20 centuries ago, a child born of a Jewish mother in , grew up to be a rabbi and a carpenter. He learned his craft from his adopted father, Joseph, studied with rabbis in the in , never married, bore no children, and lived only 33 years. Considered a revolutionary by some, a prophet by others, His destiny was His identity.

For He was both a revolutionary, and a prophet; but He was also the Messiah of Israel, the "God-Man" [eesh-Elohim in Hebrew], the Saviour, the Word incarnate, spoken of in the Torah, the Prophets, and the Writings [Psalms], and attested to by hundreds of eyewitnesses.

It is an amazing fact of history, that within just a few short years of His life on earth, an apostasy, a falling away from the Truth, seized and captivated the hearts and minds of most of the masses, just while the small flock of His true disciples began to disappear.

The Jewish Messiah from became the victim of  history's greatest "Identity Theft", bringing about a change of His Name and Person, so as to render Him and His Atoning Work, if it were possible, powerless and purposeless.

Like a tangled web of myth, stupor, and confusion, "Religion", since the beginning of time, has contrived and conspired to enslave the mind and heart of all mankind, and lead the whole world astray. Appealing to man's inherent proclivity toward ego-driven autonomy, power, and hoped for immortality, "Religion" has made promises she cannot keep. The consequences of her defective doctrines and cleverly devised creeds have been far reaching, and devastating. Rather than being an effective antidote to the unbridled passions of men, "Religion", far too often, has been its murderous facilitator. Known as Babylon in the Scriptures, the "Religion" that began with the Adversary 'Satan', was successfully packaged, marketed, and disseminated over the entire earth. In the East, these Babylonian 'Chaldean Mysteries' appeared as Hinduism, Taoism, Buddhism, and Islam. And in the West, owing to their successful assimilation throughout the Roman Empire, a harlotous union of church and state "baptized" the Chaldean Mysteries, christened heathenism, wrapped it in the banner of "Christ", and gave the world Christianity. From Eden to Egypt, from Mecca to Rome, from Babylon to Jerusalem, all nations have drunk from the chalice of her lies, for a great counterfeit has been foisted upon the whole world. Now, at long last, comes a stunning and revealing account of this powerful religious system whose spiritual and political influence has deceived the nations and led the whole world astray. At this decisive juncture of human history, all humanity stands on the brink of a cataclysmic clash of religion and civilization. The alignment of opposing forces, so accurately predicted in prophecy, will surely draw this worldly system to its fated destruction. But to all who hunger and thirst after righteousness; to every one who seeks to escape the deception of "Religion" for the truth of Revelation, and to those who earnestly desire to leave the broad road for the narrow, The Light in the Wilderness can lead the way. It took all of human history to get us where we are. Now is the time to come out of the darkness, and into The Light.

Norman Martin Wolk, M.D. is a graduate of the University of Southern California School of Medicine and University of Colorado Medical Center, and has been a family physician since 1977.

For as long as he can remember, religion and revelation has held a special fascination for him, believing that man's wholeness and health cannot be separated from the "holiness", consecration, and purpose he is called to in obedient faith by the Author of Scripture Himself.

At the age of 29, had a life changing " road experience", leading him to the Messiah of Israel, Who is "The Light in the Wilderness".

This is a wondrous journey of faith, courage, hope, and discovery.

It will change the way you see not only this world and its religions, but the Kingdom of the Redeemer, and 'the world to come'.