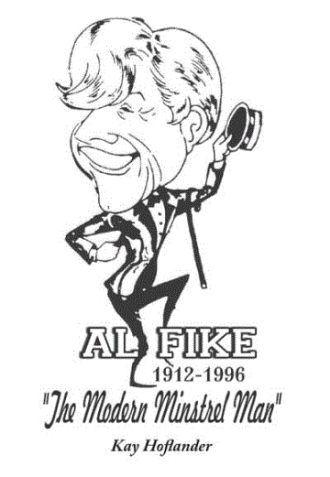 Visit any one of his shows, such as this sample one that follows (performed on ) and one can easily see why.

Al happened to be entertaining that night for a gathering of business folks at an annual event in . He began his show just like he had countless times before during his more than four decades of coast-to-coast entertaining. In his semi-retirement years, Al often did shows like this particular one for conferences and dinner meetings. Al’s old high-profile nightclub-circuit days might have been over, but for Al Fike, entertaining somewhere somehow would continue as long as he had breath left to sing.

Then, he waved off his musical partner Larry Wegner, who was meanwhile masterfully handling the keyboards, and said to the audience, “If you don’t goody I have you stand up and do it all by yourself. I have five picked out and they are looking at me like this--oh my goodness, we’ve got to goody goody now. It won’t hurt you it will help you, even if you are dressed up! Now get ready. SOOO, you met someone who set you back on your heels, goody goody.  Wasn’t bad. Let’s make it great. The ceiling is low so let’s make a lot of noise.”

Larry sings harmony, and Al says, “Now, we’re getting warmed up. That’s what we want.”

After one more chorus of ‘Goody Goody’, Al begins talking to the audience, almost everyone of them now under his spell. As anyone who ever saw The Al Fike Show live knows, it never took Al long to capture an audience, no matter how cold or hard sell.

Al started nearly every show in his later years with this same introduction, “First, let me tell you I am a native of . I was born in Forest City, Missouri, population 251, a little town north of St. Joe about 35 miles.  I can see people wonder how old I really am. I don’t tell people but I give them this hint--if you can figure out when the Titanic sank, you will know exactly how old I am. I did that the other night and I saw a lady elbowing the man next to her and saying, ‘When did it sink, when did it sink?’ Those of you, who know, pass it up and down.”

With that, Al’s show was off to a fast start. Before the audience knew what had happened, two hours had passed with not a single number repeated. Al would take a “sandbox” break, as he liked to say, and come back to entertain some more, still never repeating a song. 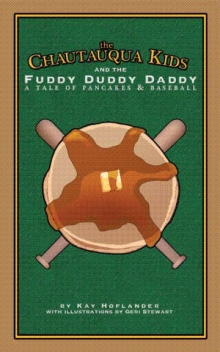 The Chautauqua Kids and The Fuddy Duddy Daddy
Kay Hoflander
$10.49 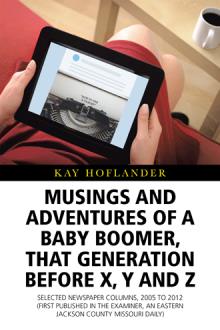 Musings and Adventures of a Baby Boomer, that generation before X, Y, and Z
Kay Hoflander
$28.99

Life in the early 1900’s was quite different from today. The pace was slower (or so we believe in retrospect). The music was sweeter. And, one learned life by the living. Then came the roaring Twenties. The pace quickened. The music became more upbeat, spiked with heady mixtures of jazz, ragtime and blues. By the early 1930’s the entire country had metamorphosed. Entertainers like Al Jolson, Jimmy Durante and Sophie Tucker were the rage, and country and western was just beginning to come into its own.

Sitting back in his home and absorbing it all was a young man named Al Fike. Born in 1912, and a schoolteacher by trade, he listened to the sounds of the country growing around him, absorbed them, and made them his own. This “collection period” continued until the late 1940’s when, to the surprise of family and friends, he announced a career change, and the legend of Al Fike the Entertainer was born!

After that, Al Fike, The Modern Minstrel Man, regaled audiences from coast to coast. Whether dressed in candy-striped jacket and straw hit reprising the classics of George M. Cohan or mimicking such greats as Ted Lewis, Durante and Jolson, Al Fike single-handedly kept the traditions of vaudeville alive in this country. He also introduced new music and new stars to his routines so that his show was a virtual “performance library” of American music, idioms, composers, and styles.

In short, Al Fike was a living legend, preserving and enhancing the traditions of the American musical stage as no other performer has ever done. Seeing The Al Fike Show was a rare opportunity to see an entertainer’s entertainer perform.

Kay (Hollenbeck) Hoflander writes a weekly column entitled ‘’ in newspapers. Her humorous and philosophical column has to do with the “reluctant aging of Baby Boomers” and is available online at http://www.kayhoflander.com.

The author holds a B.J. from the University of Missouri-Columbia and has worked over the years as a newspaper reporter and editor as well as a publisher of a weekly newspaper-shopper.