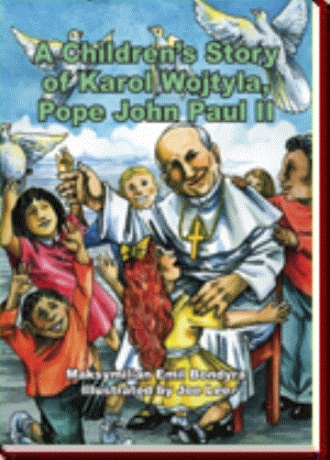 In the country of there once lived a boy by the name of Karol Wojtyla.  He was a bright young boy.  Karol was polite, and listened to his parents well.  Karol studied well in school.  He was one of the best students in his class.  After school his favorite activity was to play soccer with his friends.

Karol’s older brother was a doctor.  Karol wanted to be as smart as his brother and studied hard.

When Karol got older he took a short break from school to work as a stonecutter in a quarry.  It was hard work.  But, he was not afraid of hard work.  He would come home from work very tired.  But after a good nights sleep he was ready to go back to work.  He always told himself quietly that all of that hard work would someday reward him.

Soon Karol went back to school.  He wanted to be smart and learn everything there is to learn about life.  He wanted to become a priest.  His father always said that the people need a good well educated priest in their church.  They need a strong person who they can follow.  They need a leader who could show the people a lot of good that can come from the heart.  So one day Karol became a priest.

As a priest he continued going to school because there were so many new things to learn.  He became a very well educated priest and traveled to other countries to learn other languages.  He also taught other people all of the things that he learned.

Before John Paul II became Pope he was known as Karol Wojtyła. This is a short, illustrated story for children as well as adults who would like to get to know the life of Karol Wojtyła. The story starts with Karol Wojtyła as a child. Playing soccer with his friends was his favorite game. He was a good student with a passion for knowledge that would eventually lead him into priesthood. Karol Wojtyła climbed the hierarchy within the Catholic Church that would ultimately lead to his appointment as the 264th Pope of the Catholic Church. He loved all people, especially children and visited many countries throughout his tenure as Pope.