The Council of Elders

by Neil A. Harris 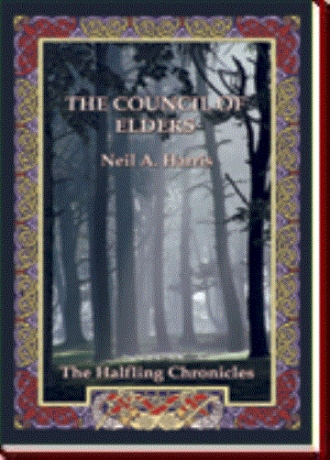 ‘Ahem.’ The elf at the end of the bed watched him through a pair of wire-framed glasses that were tightly clipped to the bridge of his long, angular nose. The curling bronze metal struggled to contain inch thick lenses which magnified his pale watery eyes until they seemed to half fill his face.

He blinked alarmingly, behind the bulging glass.

Apparently satisfied that he now had the room’s only other occupant’s undivided attention he straightened, buffing his sparrow-sized chest out with great formality. In his right hand a quill was poised expectantly over a battered wooden clipboard on which a half-rolled parchment had been carefully pinned with four shiny new thumbtacks.

‘Mr. Copper Beech?’ His voice was high and precise, the clipped tone of someone who is already assuming you are being deliberately difficult. He peered over his glasses for a moment, eyes shrinking to something more normal.

Stephen was relatively sure it was an elf. Well, as sure as he could be having never met one before. Obviously, being a healthy twelve year-old he had seen numerous cartoons on the subject and one of his favourite books, ‘Mythical Folk and Fantasy Creatures’ had a remarkably good drawing.

The one now standing in his bedroom looked an awful lot less impressive, in fact he looked rather like a lawyer from one of the black and white movies his mother liked to sit through on Sunday afternoons.

The elf was dressed in a charcoal grey jacket fastened tight across his narrow chest by a neat row of simple black buttons, its two long tails falling almost to the floor behind him. The wide collar of his white shirt sprung out from his scrawny neck, framing his prominent Adam’s apple, which bobbed up and down without an apparent pattern, making his large floppy bowtie bobble with a life of its own.

He reminded Stephen of an ostrich he had seen at the zoo, knees under the tight white trousers wider than his long, bony legs. Ending with a pair of immaculate batten leather shoes, the brass buckles catching the light falling from the half-open doorway.

‘Eh…. Sorry?’ Stephen said, elbowing himself up, blinking the sleep from his eyes.

He glanced sideways at his bedside clock, where a small row of blue numbers happily announced that it was 3.02 a.m.

The elf’s mouth shrunk down on itself, lips pursing until Stephen had the alarming thought that they might completely disappear leaving the elf mouthless. He gave Stephen a long, piercing stare over his frames before glancing down at the clipboard that held a seemingly endless row of tiny letters with a small box next to each.

Stephen could just make out that most of the lines, if not all, seemed to have a neat black tick in their box. He leant forward to see the parchment more closely.

‘Ten pence, ten pence,’ the parrot squawked, turning its head to fix him with one beady eye, ‘tell your future for ten pence.’

Stephen Beech is just an ordinary boy living in an ordinary world… or so he’s been led to believe.

What he doesn’t know is that his mother hasn’t been wholly honest about who he really is, and now the truth is catching up with him.

In a distant “When” a crisis has occurred: the vote to choose the next King Elect of the elven Council of Elders has been tied. Without a King, they are unable to govern the lands, unable to enforce laws, and worst of all, unable to stop the impending war.

There is nothing more they can do, as all the elves have voted! All except one that is… or rather half of one.

He just doesn’t know it yet…

Neil Harris was born in on the south coast of and in a round-about way involving world travel, marriage and numerous dubious decisions, ended up living in .

Somewhere in the middle, he qualified as an architect and went on to work for an eclectic range of firms from international brand names to specialist conservators before selling his soul to a construction firm for more money and a car.

Having a retired pilot for a father, a retired dancer for a mother and a rocket scientist for a brother, Neil appears to be the only ‘normal’ one in his family. However, upon his return from five years in , finding himself without a hobby to fill the train journey to and from each day he started to write.

He is, by his own admission, totally unqualified to write but as an expert day-dreamer and avid reader he enjoys every minute of it.

Neil’s aim in life is to not take things too seriously, and hopes his book will go a little way to helping others do the same.