Geordie and the Spaceman 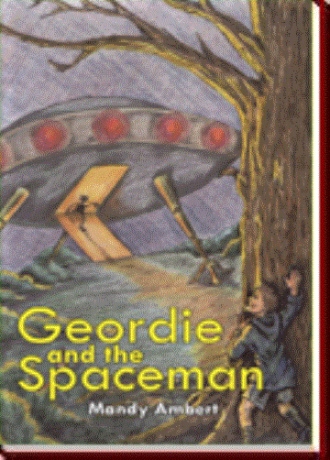 Chapter one- Geordie and the Encounter

Alan Kirkpatrick was a Geordie-lad and he was 8 years old. He was known as Geordie like any other Tynesider because he came from and every day you can here someone in the street say “Howay Geordie” or “How are ye gannen, Geordie?”

Alan lived with his Ma and Pa and his brother “our Jim” and his sister “our Doreen” at number 97, Sackville row. He had been born there with Auntie Hilda helping his Ma and his brother and sister had been born in the same bed as he. Alan was a canny lad his Pa would say with a good left foot which made him quite useful on the right wing when the bigger lads allowed him to play football in the fields behind the houses. “Not quite wor Jackie,” Pa would say after the famous Newcastle United player “He’s small for his age but he’s fast and he has a mean left foot”

Pa worked at the local shipyard as a technician. Every day he would get out his bike and cycle the 5 miles to work with his packed lunch having waved goodbye to his wife and said to his children “Work hard at school. Keep out of trouble.” This comment was always aimed at Alan. He was picked on by some of the older boys and bullied because he was small.  He had a short temper so he would scrap with them and hold his own until “Our Jim” would help and then Jim would get into trouble with the teachers. Jim was a big boy and Alan looked up to him like he was a hero. Jim looked after Alan because behind that tough exterior he was so proud of his younger brother feeling fiercely protective and he knew that one day he would be a great footballer or athlete.

Geordie and the Spaceman is the story of a young lad named Geordie who meets Yuk, a space boy who has stolen his father’s space ship as a dare and landed on Earth by mistake.  Yuk knows his father will not reach him for a week and the story covers the boys’ adventures as they build a lasting friendship. Geordie’s family look after Yuk and keep his arrival a secret, aided by the fact that Yuk can turn himself invisible.  As the week progresses, Yuk realizes that there are a lot of similarity between his race and that of the humans. In fact, Earth has been carefully studied by the ‘Yukkarites’ for quite some time and Geordie’s encounter with Yuk leads to an early meeting of the two life forms.

Mandy Ambert is a physiotherapist, and lives in the ’ countryside with her French husband and two children. She has partly written, co-edited and published a physiotherapy textbook and whilst not working at the moment, attends a French course, writes fiction and enjoys a good game of golf! This book hales from her father''s experiences in and the places she describes still exist today.