Would you put your head in a Microwave Oven 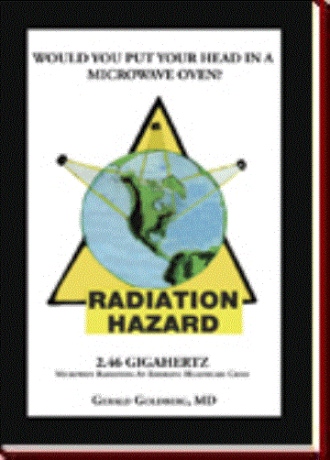 This manuscript was written to present the data to the average reader so that they could judge the issue for themselves.

The health consequences from continuous low level exposure from microwave radiation can be catastrophic. The transmission of microwave transmission can be handled in a safe and effective manner to provide for global communication without affecting the overall health of our planet.

The book starts by examining dosimetry which shows which parts of the body are most sensitive to microwave radiation based on studies done by our Armed Forces. Dosimetry is also predictive of the pattern of injury that one would expect to find.

The third chapter links the rise of radiation against the simultaneous rise of certain illnesses in society. It demonstrates through the use of graphs that the parallel and symmetrical rise of certain illnesses across broad geographic areas reflects common force acting equally on all these regions. The graphs also demonstrate that it is the rate of increase not the absolute number of cases in a given region that is important.  It is important to emphasize that microwave radiation is not the only cause of disease.  It is potentially one of the few common links that unite large segments of our population to recreate and produce similar patterns of illness in widely separated geographic locations.

Microwave injury can also contribute to other patterns of illness. In the fourth chapter, under medical equivalents, I have grouped the common names that are attributed to illnesses by organ systems. If common illnesses are examined from the perspective of simultaneous parallel geographic increase than the influence of microwave injury can be discerned.

The fifth chapter deals with common herbs and nutritional supplements which have been found to be usefull and protective against the effects of microwave radiation. The chapter is liberally referenced from the current scientific and medical literature and serves as a handy reference for the average reader who may be interested in prophylactic and preventative strategies to maintain their health.

Would you stick your head in a microwave oven? Well would you? Of course not.

Technology has transformed this planet into an open microwave system with its satellite transmissions. This book examines what the health consequences are.  This book simply points out that the gradual rise in illness across broad geographic areas are an early indicator of microwave illness, independently of what the experts lead you to believe. The handwriting is already on the wall and most of know that something is wrong. This book discusses in simple terms the effects of microwave radiation on the human body.  I utilize dosimetry studies done by the US Air Force, which outline in clear terms what organs of the body are most vulnerable to cumulative microwave exposure.  I outline the mechanisms by which slow exposure is masquerading as various illnesses across this country.

We are on the verge of a health care crisis which threatens to bankrupt our society and health care system. Whether we like to consider it or not the planet that we are living on

has been transformed into an open microwave system.

In this book I examine the common link between microwave radiation and seemingly unrelated illnesses.   The book demonstrates that the rising incidence of certain illnesses and cancers across broad geographic regions parallels the increasing rise in exposure and use of microwave radiation.

This book is a common sense approach to the subject which is presented in a clear language that the laymen can understand.  Also it is liberally referenced from the scientific literature. The book is designed to be generally informative as well as a reference source for the average reader. Additionally I have provided a wealth of resources that have been shown to be beneficial to offset the consequences of excess microwave exposure.

I am a medical internist with over 30 years of clinical experience. Additionally I have been researching the biomedical literature from a traditional and holistic perspective for the last 15 years. I have training in herbology, Chinese medicine, nutritional approaches to health and other modalities.  I have done extensive research on the causality of disease and its relationship to environmental factors as will as researching approaches to deal with these issues.  I have been a radio show host involved in sharing information with the public on alternative health issues and perspectives in the NYC area for the past 5 years and have been actively involved with a nutritional pharmacy.