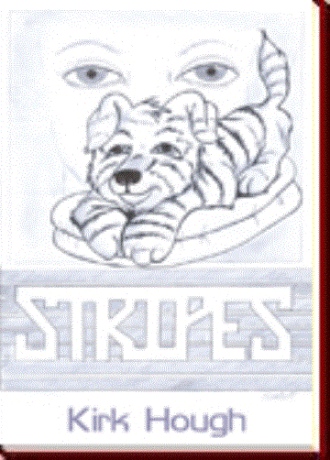 It was starting to look hopeless for Stripes.  Hopeless because he may never be bought to be part of someone’s family.  Just when the storekeeper decided that maybe they should keep him because no one wanted to buy him due to his size.     Mr. Tops walked through the door of the little pet shop.  He proclaimed that he was looking for a pet for his son Timmy who had been born prematurely eight years prior to the day of him entering the shop.

“I want something not too big, but, not too small.  I am looking for an animal that can play with my son and protect him at the same time without my son getting hurt,” Mr. Tops said as he casually looked around the store without too much interest.

If Mr. Tops had not stated his purpose for being there you would have thought that he was just loitering.  Then, almost simultaneously as the shop owner was about to show Mr. Tops a cute bunny rabbit, he spotted Stripes.  “There!” Mr. Tops said pointing at Stripes.  It was as if Stripes was what he had been looking for all along, even though Mr. Tops never said what kind of pet he was looking for, just that he was looking for one.   The look on the shop owner’s face must have said a lot, because Mr. Tops responded with a, “My good man, you look as  though you’ve seen a ghost.”

The shop owner could only say, “Are you pointing at the striped dog over there?” which he choked out with some difficulty.  Mr. Tops asked with a skeptical look on his face.   “Is something wrong with the dog that I should know about?”  “No.”, the shop owner replied, “It’s just that...”  And the shop owner went on to explain Stripes’ life from beginning to the present time.  The shop owner never called him Stripes, because, of course, he had not been named yet.

Stripes is a book about a young boy who finds a glimpse of himself as well as responsibility in the most unlikely place, his first pet, Stripes.

While interacting with Stripes and his situation, Timmy Tops displays qualities that his parents did not know he had.

Timmy surprises his family by overcoming his loss and doing what they have taught him throughout his life.

The time that Timmy Tops spends with his friend, Stripes, is short in comparision.  But the short time he spends helps the family to realize that growth, understanding, and love is a vital part of Timmy's life.

The author was born in Baltimore, Maryland and later moved with his parents to Chesterfield, Virginia.

He has written numerous songs, poems, and verses for cords.  All of his wrintings have been for family, friends, and himself.

The author has always loved to write and use his words as a form of expression and a way to reach people.