Into The Mouth of The Cannon 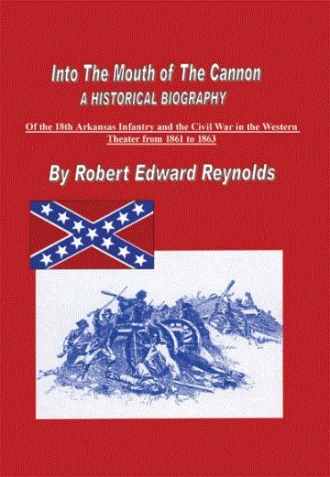 Many stories have been written about great Confederate icons, such as the Wizard of the Saddle, , whose exploits have captivated the imaginations of many readers.  This story is about a family in , and the hardships they endured during the Civil War.  Four members of this family joined the 18th Arkansas Infantry:  two sons served as lieutenants in the Confederate army, and two brothers-in-law served, one as a sergeant and the other as a private.  The story follows Company H, Saline County Rangers and other units on their trek from , to the siege of Port Hudson, Louisiana.

The story also centers on the junior officers of the 18th and the average Confederate non-com, whose face was browned by constant exposure to the elements, and often unshaven.  His face was marked with sweat and dust.  Dark stains of powder covered his face, which testified to the many battles in which he had fought.  His hair was unkempt, matted with dirt and crowned by a weather-beaten old wool hat.

Crossing his back from his left shoulder hung his prize companion that he would not part with under any circumstances.  The blanket role that dropped down to his right side contained one of his most prized possessions.  Within its contents was an extra shirt.  The bedroll on his back comforted him; he knew that in the warmth of this blanket, as he slept at night, he would have some protection from the unforgiving elements of rain and cold.

On his back was a greasy haversack, and attached to it was a flannel-covered canteen, which he borrowed from a dead Union soldier.  He had learned that a dead Yankee could be one of his best friends, and to prove it he carried a United States Army Enfield rifle, which was supplied by the unresisting dead.  His trousers were of different shades of blue and usually of the latest military issue, compliments of the Union army.

Johnny Reb was not concerned that his military dress was not the most up-to-date, but he was proud to know that he was distinguished from his enemy by a faded gray jacket that had been stained by the blood of his enemy ... and his fallen comrades.

A true story that is well-documented. Each chapter has numerous source reference notes that authenticate the research. The book is indexed and also contains an appendix making it easy to do research. It is illustrated and offers the resder letters written during the Civil War period never published before. The book reads with the ease of a novel. It is filled with factual accounts that pull the reader into the events taking place on the written pages. The rebel yells, the ear-splitting roar of the cannon and the heart wrenching cries of the wounded hold your interest as you are pulled into the story. Truly this is a book full of action and suspense. The writer carries you right into the realities of the Civil War.

The author has a lifelong interest in Civil War History, specializing in the Trans-Mississippi Theatre.  He is a member of the Garland County Historical Society, He is a former associate editor for Travel Host Magazine of Hot Springs, Arkansas and has written for the magazine and local newspapers. He and his family operate a wholesale nursery business in Hot Springs AR, established in 1977.