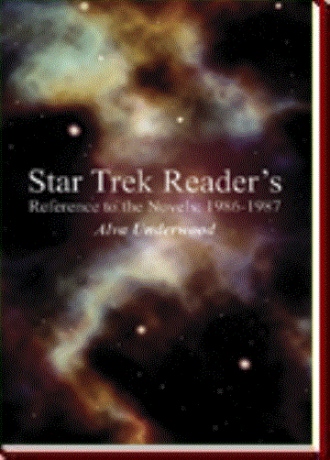 --Federation starship registry number NCC-1701 identifies one of twelve    original starships in the Constitution heavy class assigned to 5-year missions.  This ship was first commanded by Captain April whose Chief Security Officer was George Kirk, father of the present captain.  These two men took the ship on its shakedown cruise.  The second captain was Christopher Pike.  This class of starship is the largest free-moving man-made object in space, to date.  At 947 feet long, 417 feet wide, 23 decks tall and weighing 190,000 tons, it is most formidable.  Its design, crew compliment (SEE App C) and supplies would allow it to sustain itself for 18 years.  Built at Terra's San Francisco naval yards under the direction of StarFleet Command, the Enterprise is designed to cruise at warp 3 or 4 (SEE App D) and maintain a standard orbit of 1,000 to 7,000 miles above a planet.  The ship is not designed to enter an atmosphere of a planet (SEE Crisis on Centaurus) or land on a planet.  It is composed of three sections.  The saucer-shaped primary hull, 417 feet in diameter and 11 decks tall, contains all elements necessary for independent operations if needed.  The cigar-shaped secondary hull, 340 feet long, 112 feet in diameter, contains the twin engine pods, each 504 feet long, 60 feet in diameter. Although the is operated and fitted as a military vessel, it is not considered one.  Its continuing mission is "to explore strange new worlds, to seek out new civilizations" and to open up new vistas for humankind.  Often the ship is called upon to give assistance---military, political, and medical---to settled locations, to transport people and goods to various planets, and to test the integrity and courage of the ship and its crew. To protect itself and to establish its strength, the ship carries a wide variety of weapons.  Included in its arsenal is a battery of ship-mounted phases, three banks of each.  The ship's principal weapons are enormous versions of the hand phaser.  A second type of weapon is the photon torpedoes, "energy pods of matter and anti-matter contained and held temporarily separated in a magno-photon force field" (Roddenberry 194).  Also the ship can utilize its tractor beam as well as its transporters when needed.  Standard individual weapons, panchromatic helix accelerated stimulated emissions radiation, better known as hand phasers, work on the same principle as the ship's banks of phasers.   These contain a quantity of energy that can be polarized, focused, and transmitted in any frequency or energy state (Davies 148).  There are three types of hand-carried phasers.  This first is small, not much bigger than a tape-cassette, and can be worn on the belt under the uniform shirt.  The second is a combination of a small phaser but mounted onto a pistol and worn handing from a weapon's belt.  The third type is a phaser rifle. Standard on a starship are the various pieces of sensory equipment that enable it to perform its missions while maintaining the safety of its crew.  Often these sensors are the ship's best weapon.  To man and operate such a vessel requires a large crew.  The carries a crew of 430, with a third being female.  This crew is composed of international and multi-racial and alien members.  To control a large crew, a line of command is required.  All the ship's members are known as the crew.  However, a small group are known as "senior officers."  This group has varying amounts of authority.  The ship has a captain, a first officer, commanders, lieutenants, ensigns, yeomen.  Most of these titles designate levels within a discipline.  For example, lieutenants are found in navigation, engineering, and medicine.  Although the operates at the outer end of a chain-of-command, the captain, on ship, is in absolute control.  His superior is a Starbase Commander and StarFleet Command.  Starbase Commanders are subject to StarFleet Command, whose main headquarters is located in , Terra.  All of the crew are divided into three sections: science (blue shirts); engineering and ship's services (red shirts); and command (gold shirts).  To service the crew, the starship is equipped with many areas, three of which are the most interesting.  Included on the is the ship's library-computer, the most sophisticated of its kind, capable of storing and retrieving vast amounts of information.  Its services can be channeled to any station or viewing screen on the ship.  In addition to the elaborate computer system, and tied to it, is the ship's galley, making it possible to feed the 430 crew members anything they request.  To provide recreation, a variety

This Reference continues expanding much of the original material detailed in the first three volumes. New adventures are detailed and old adversaries are visited.  Biographies offer new material discovered in the novels, and a Vulcan course of study is included.  How the Romulans  split from the Vulcans is detailed here as well as new information about Andorians, Tellarites, and Vulcans.  Here you can visit with new crewmembers, meet a Coridani, swim with a waffa, learn about the Denebians, shudder at the inhumane actions of Ravens,  contemplate Matter as God and the Romulan concept of mhnei’sahe, while joining in the fun concocted by the natives of Direidians as a prank played upon Romulans, Klingons, and Kirk’s crew. Learn more about Romulan’s twin worlds, ch’Havran and ch’Rihan, how the was nearly destroyed by a minute black hole, and Kirk’s second out-of-body experience.  Immerse yourself in a galaxy where Terrans continue to expand their knowledge, meet fascinating new peoples, and “go where no one has gone before.”

Since the original airing of “Devil in the Dark,” Alva Underwood has been a fan of the STAR TREK world, buying, reading, and writing about its peoples, places, and events.  This native Missourian has also written three other References to Star Trek novels, a history of her local library, and a history to celebrate the 125th anniversary of her church.  This Reference continues her study of Roddenberry’s fascinating world in her attempt to bring together reliable information for those who find ’s adventures interesting.  Here the reader will find additional biographical entries about the main characters, meet new aliens, and discover a continuing sense of just how wide and deep the history of the 21st  and 22nd centuries is according to the imagination of the novelists.  The author hopes any reader of this and the other References will find as much enjoyment here as she did while researching the material.