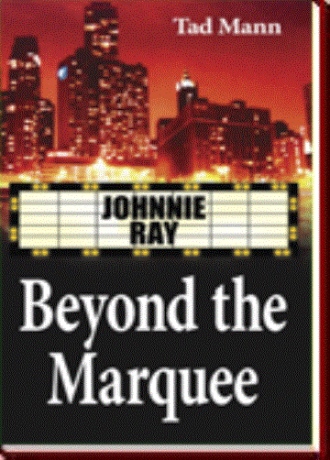 In the movie ‘On the Waterfront’, Marlon Brando uttered the profound words “I could have been a contender”, “I could have been somebody”. This is an insight into the talented and gifted man who was in contention of being the most significant entertainer of the twentieth century.  I often wondered if many years later these words echoed though the mind of Johnnie Ray.

Instead because of his self destructive ways which included alcohol abuse, a lack of discipline both personally and professionally, overwhelmed by the attention and demands of millions of fans worldwide and becoming the first really big international star, let it all slip away.  Johnnie Ray was 24 years old when he was thrust to the top of the music world. A tall thin sandy haired Adonis to women.  His boyhood charm and smile lit up the hearts of anyone lucky enough top be close to him.   Even if only momentarily. It lasted forever.

Mothers felt sorry for him because of his deafness and wanted to cuddle him and protect him.  Their daughters were madly in love with him and wanted to date and marry him.  Those whom were close to him and seriously interested in his career saw a different Johnnie Ray.  They often met with frustration disappointment and a lack of cooperation.  Johnnie was having an unprecedented life.  But the business people could not control him nor did he listen to suggestions.  Johnnie was having the time of his life. A life that was a meteoric rise from the farm to stardom.

We were making things happen and Johnnie unaware of the music business had no idea that a lot of work had to be accomplished other than opening a curtain and introducing him to the wild crowds who came nightly to see him no matter where we were. He knew he was the star and we all tread softly. Working with a star that was of such magnitude was difficult.  It was hard to control him or to explain what he can do and what he can’t. There is a rule of thumb regarding position in life.   There are things you can do that others can’t. And others can do things you can’t.

Image is everything in show business.   Johnnie looked so young and innocent with a handsome boyish look.  An ideal image. This image plus his unique performances   are what dreams are made of. But when the curtain came down the chameleon that was Johnnie Ray changed colors and became a nightmare.   But a lot of us who liked Johnnie tolerated it and bit our lips. Yes there were some loyal friends who stuck with him until the end.  This writer being one of them.

An obscure John Alvin Ray, a small town hopeful from Dallas, Oregon became an international singing star in 1952 after changing his name and becoming the bridge between  the  mellow big band singers and today’s  rock and roll  performers.

Johnnie Ray would come full circle and in another of his accomplishments disprove ‘you can’t go home again’.  After a 1989 concert in which would be his last public performance, he had faint memories of his meetings with Kings and and heads of states. With reflections of what he had achieved and lost, now a broken man came home again as obscure as when he had left. If there is anything positive about death it would be Johnnie Ray died young at 63 which allowed most of his boyhood classmates a chance to say goodbye at that concert. After 37 years Johnnie had come home to see the only true friends he would ever know. Unfortunately, the area had grown a lot in that time. New residents had no idea who Johnnie Ray was or cared. Borrowing lyrics from his music Johnnie Ray wanted to know if the folks he used to know still remembered him. Of the millions world wide who knew him, only a few hundred came to remember him.

The world of Johnnie Ray was over .His reign has now diminished to a simple brass headstone that reads John Alvin Ray 24, 1990. With his death, Johnnie Ray as he was known to millions no longer existed.

As ages, so does the memory of Johnnie Ray who single handedly changed the world of music. There are talks of memorials and museums. It is doubtful anything will materialize as they don’t commemorate the forgotten.

The author has been involved with the entertainment business for over 50 years. He has appeared on stage and entertained around the world as a singer and drummer. He had roles in management and publicity for other entertainers. He worked as a stage lighting director for several world  tours and as a  stage hand for hundreds of other entertainers.  He was involved both professionally and as a friend of 50’s singing sensation Johnnie Ray in some capacity for over 38 years.  He can also add being a news director on radio and being a disc jockey for several years to his resume. He is no stranger to the world of entertainment and after much urging and pleading from Ray fans, has opted to write this novel.

He and friends perform internationally as part of the Johnnie Ray Remembrance Tour, which raises money for hard of hearing people and assisting in the purchase of hearings dogs as a tribute to his deaf friend. A portion of the sales of this book will be directed to deaf causes in the name of his departed friend.  He and a friend also are webmasters of two Johnnie Ray web sites that attract nearly 50 thousand hits per year. This is the author’s first book and is an attempt to bring readers a better understanding of what life ‘Beyond the Marquee’ is really like.