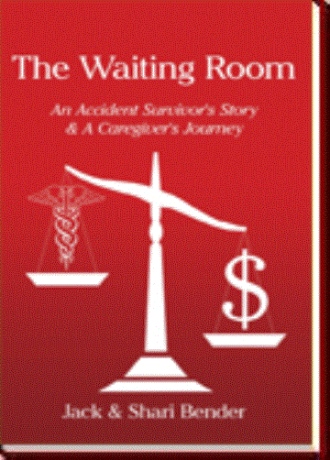 Sitting in the waiting room at Dr. T’s office was like being in a war zone MASH unit. There were people with halos on their necks and other body parts, a vast array of broken down bodies and souls everywhere. There were people that were in wheelchairs... people that could barely walk or hold their heads up... people so overly medicated that they stumbled or fell asleep... people in crisis. Each one of them had a horror story to tell. Over the course of several months of visits to that office, and others, we heard many of their stories. There were stories of accidental injuries, insurance scams, wars with insurance and Workman’s Compensation, employer issues, marriage/family break-ups and more. Some were the same as our story, others were far worse. Overall, they were us and we were them. Damaged goods going through hell.

Some people swear by the surgeries performed by these doctors. Others are living without surgery but are addicted to pain medication. Some have been dealing with both. In any case there are so many things that happen after the initial injury that it is hard to comprehend how most people live through this. Yet – I also know there are people that actually would rather have not survived to make it to “The Waiting Room” to talk to us. They hoped for an easier way out of their pain. In writing this, we hope that others that end up in “The Waiting Room” learn not only that they are not alone in their battles, but that there are ways of finding help so that you survive not only your accident or injury, but survive the life you are left with after treatment. You’re not alone, although you may feel like it for quite a while.

I don’t know when it happened, or when I first realized it … but somehow I was the natural choice to be the person in my family never to have a life of her own. Somehow, I became the mother, father, daughter, caregiver, cook, bank and nursemaid to the world. In that moment, my right to a life, including a college education, a normal dating life, involvement in sports and team activities … all those options disappeared like a ring of smoke hanging in the breeze, waiting for the wind to decide which way it was to travel. This was no natural occurrence, and as it happened I was made to think it was my duty, and to feel bad for wanting it to be otherwise. I was told to be the bigger, better person; to handle it, if only because I could. To deal with what others around me could not.

"The Waiting Room" is the story of how one tragic event in life can not only change the course of that life, but teach us valuable lessons - some good, some bad. It's honest, and at times in-your-face, but most of all it shows that the light at the end of the tunnel is NOT always a train. In this book you will get an insight into the workings, and mishaps, of Workman's Comp, Long Term Disability, the insurance industry as well as the red tape of our justice system, all  in layman's terms that anyone can understand.

In the story that follows "The Waiting Room", "A Life Interrupted", Shari chronicles her life as a Caregiver, which started at a very early age. This journey involved many personal sacrafices on her part, which led her through a life of placing everyone else's well being ahead of her own.

Together, these two stories give you a well rounded image of life and all of it's tragedies from two perspectives - the injured and sick, as well as the Caregiver.

Jack is originally from Minneapolis, but moved to the Chicago suburbs in his teens where he & Shari met in High School. He was a member of the Military Police Corps in the Army and attended Eastern and Northeastern Illinios University, where he received his degree in Communications.

Shari & Jack got together at their 10th High School reunion and were married 3 months later. They currently live in the far north corner of Phoenix with their 2 English Springer Spaniels and a variety of other small animals that keep them busy. Jack is a member of the Masons and Shari enjoys charity work and helping at the animal shelter.