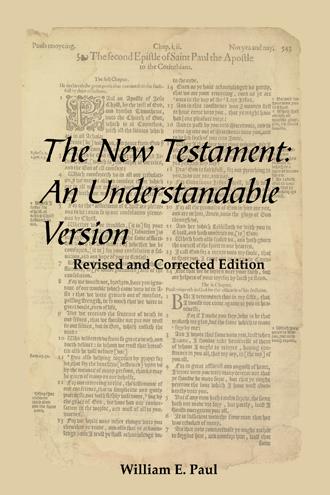 William E. Paul, a native of , graduated from () South high school in 1945, then served overseas in the U. S. Navy near the end of World War II. Upon his honorable discharge from the Navy, he married Bethel Carpenter, and soon enrolled in Midwestern School of Evangelism (), graduating with B.S.L., B.Th., M.S.L degrees. He is now a retired minister, having served as an evangelist among churches of Christ in located ministries in , , and . His ministry, since 1951, has also included conducting gospel meetings, seminars and workshops, as well as teaching in youth camps and Bible conferences in 23 states and on mission fields in the and . He has also served as an instructor in five Bible colleges (, , Washington and ).

Paul presently devotes his time to writing, having authored twenty-four books, booklets and pamphlets, as well as having articles published in a number of periodicals. His most recent book is English Language Bible Translators (McFarland, 2003). He has operated a publication ministry since 1955, which included editing the religious periodicals News and Truths and Impact for Christ. Since 1992 Paul has served as chief editor of Bible Editions & Versions, the journal of the International Society of Bible Collectors.

Being an avid collector of Bible translations, Paul makes use of his extensive Bible library of more than 600 volumes in producing books and articles on various themes related to the history and text of the Bible.

The father of six grown children, Paul presently resides with and cares for his semi-invalid wife near the rural village of Franktown, Colorado.