Walking With A Cane 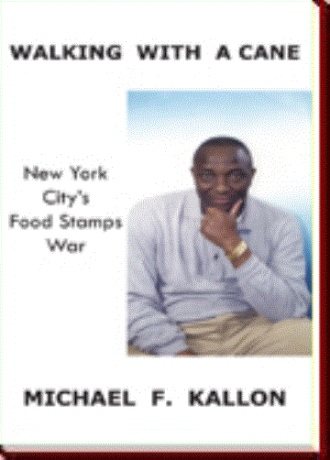 Walking With A Cane

Walking With A Cane tells only a portion of the tragic pandemonium and trauma when the mayor of abruptly stopped the poor from getting food stamps. The poor were cut-off from food stamps and were dispatched to what he called “workfare program.” This gave birth to the largest number of untrained sanitation workers in the history of the city.

The abrupt action on the part of the mayor, gave birth to crowds of the poor and some sick men and women of all ages, even welfare moms, and their infants in strollers, and the homeless, to parade all the food stamps agencies in the boroughs of Queens, Brooklyn and Manhattan just to sign-up for food stamps. They were paraded even during the inclement weather a technique uniquely invented by the Human Resources Administration in , just to deny the poor food stamps seekers - food. The poor, sick, old, and young, had to accept such inhuman and tragic consequences in their lives since they had no where to turn to but the same city administration that tried to deny them food.

Zombo the main character in the book is the author himself. He was injured through spinal injury by a hospital in City, and a genuinely sick man. He found himself in that critical situation fighting for food to survive in . It was the trauma he was put through that ignited his senses to write this book about the events that took place at that time.

The situation became more arduous when the Human Resources Administration in New York City invented special clinics in Manhattan where doctors determined if the poor were sick, sent to work, or be qualified for food stamps. The unfortunate situation that existed was that, these doctors sided with the harsh policies of ’s Human Resources Administration.  Although most of the patients that went to the clinics were genuinely sick, and admitted in top-notch hospitals in , these doctors wrote reports that only forced these sick patient to go to work, or denied food stamps. Reopening such food stamps cases was possible through Divine intervention, or through fair-hearing conferences held in the food stamps kangaroo courtrooms held in the Human Resources Administration’s offices in . The judges were able to overturn the doctor’s baseless decisions by looking though the patient’s medical records enabling them to qualify for food stamps. This was how wasted the city’s funds.

The society the poor lived in was called the “BIG APPLE,” which meant, where millions of dollars are kept in huge vaults in banks, only to smile at the abject poverty of their own poor in .

Things didn’t go too well this time in the city. Some members of the minority groups were sodomized, shot, and killed by ’s finest, as the police were called. The hungry and angry homeless men, and women, the poor, and hungry food stamps seekers pushed the innocent ’s commuters off the railings to their deaths in front of incoming subway trains. The cab drivers were secretly murdered in large numbers in . Some well armed, and hungry homeless men, and women left and stayed behind bushes, and under bridges, where they hated the civilization they left behind them, and challenged anyone to come to the

Michael F. Kallon, a native of on ’s west coast has lived in the since escaping the barbaric war in in the 1980s, and also the warring in in the 1990s.

He was a student of the catholic primary school in his home town of , and also of the in . He also furthered his education at the Kakata Teachers’ in , where he obtained an Associate Degree in Education.

He has a BA degree in Writing and Literature from in , and also a diploma in Free Lance Writing with the Harcourt Higher Learning in . He also pursued a career in Private Investigation from the in .

Mr. Kallon has written many works on his KISSI culture, in , and now on life in the .