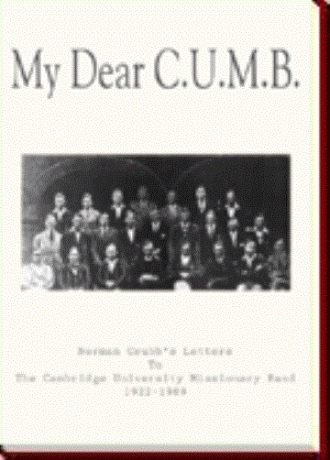 We all look back on an occasion like this to thank the Lord for His goodness and faithfulness, not just to ourselves, but to the whole of the Band.  I believe I was the first of the Band to sail to the mission field in 1919, although C.U.M.B. was not formed in those days; but in clearing up our back stuff in preparation for the move to U.S.A. in April, I came across photos of the crowd from C.I.C.C.U. at our wedding, many familiar faces, and better still, the photo I am taking with me of that first Cambridge House Party Mrs. Studd arranged at Keswick in 1919, when the Holy Ghost came down in such memorable power on us, spreading on next term into C.I.C.C.U., and then into the birth of the I.V.F. with the first conference in London that Christmas.  Great days, when we used to meet in various men’s rooms – Charles Bradshaw’s, Leslie Sutton’s, for three hour prayer meetings on our knees after tea.  I can still hear Bob Walker’s emphatic Amens!  And I can see the enormous form of Tiny Palmer among us, catching the fire which sent him to start the O.U.B.U. at .  Thank God, it was the fire of the Holy Ghost, not man’s made-up efforts, and He still burns in our hearts.  It is still true:  “Whom having not seen, we love; in Whom though now we see Him not, yet believing, we rejoice with joy unspeakable and full of glory”.  And I think to me the best of our C.U.M.B. mag. is the sense I get of the keeping power of God in our lives and ministries.  This is a time, too, when we specially remember with thankfulness those that give their time sacrificially to keep C.U.M.B. going.  We remember Jack Tetley, and Clarence with all that his home has meant on many occasions, and now Alan and John.  May it be true of all of us:  “Be thou faithful unto death, and I will give thee a crown of life”.

With my love in Christ, 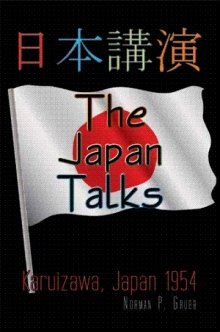 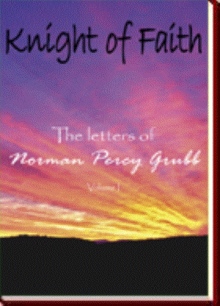 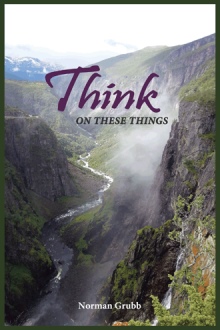 Think on These Things
Norman Grubb
$12.30 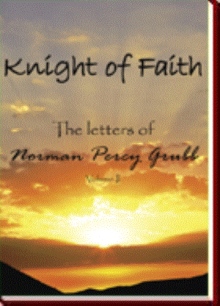 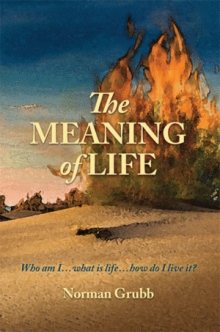 In a college room at Cambridge University in 1920 twenty four young men, who had heard God’s call to the mission field, knew they wanted to keep in touch after they had gone their separate, God-appointed ways. They had formed a close bond during the previous years at as they prayed together, studied their Bibles together and shared their faith in Jesus Christ with fellow students, calling themselves the Cambridge University Missionary Band (C.U.M.B.). In the next seventy years these men would be involved in worldwide movements of the Holy Spirit.

This book contains the letters of one member of the Band, Norman Percy Grubb. Although not at the inaugural meeting because he was already in the with C.T. Studd, was one in heart with his brothers. They shared intimately with each other–their successes, sorrows, joys and failures.

In these letters spanning the years 1922 thru 1989,  you will find men of faith; men with a heart and passion to share their Saviour; ordinary men; extraordinary men; men involved in many great and worldwide movements of the Spirit and simple men with a lifelong love for their Lord, their families and each other. You will find yourself caught up in history and inspired as you share in the lives of these “called” men of God.

Norman Grubb was a missionary to the in the 1920’s with the Worldwide Evangelization Crusade (W.E.C.), originally the Heart of Africa Mission, founded by C.T. Studd. After C.T.’s death in 1931 became W.E.C.’s leader.

married Pauline Studd Grubb in 1919 and they had four children. They moved to the in 1957 to take over the leadership of W.E.C. of . Norman was involved in many other Christian organizations, including:  Christian Literature Crusade, Faith at Work and International Christian Leadership. He was a prolific writer, producing numerous books, articles and letters. His most well-known writings are Rees Howells Intercessor, C.T. Studd Cricketer and Pioneer and The Key to Everything.

He saw his retirement from W.E.C. in 1965 as God’s “redirection” for him to bring to the body of Christ the truth of Galatians 2:20 which God had given him long ago in Africa: “I am crucified with Christ: nevertheless I live; yet not I, but Christ liveth in me: and the life I now live in the flesh I live by the faith of the Son of God, who loved me, and gave Himself for me.”  Through the last years and days of his life his joy continued to be bringing the world the message that the Apostle Paul called his second commission, “to fulfill the word of God; even the mystery hidden from ages and generations, but now is made manifest to His saints…which is Christ in you, the hope of glory.”

DeeDee Winter lives in Arlington, Texas with her husband, Gary. They have one daughter, Kim. DeeDee’s thirteen-year friendship and co-working relationship with Norman Grubb was formed around their mutual understanding of union with Christ and developed through their exchange of letters, travel together throughout the U.S. and many visits in one another’s homes. DeeDee hosts the website www.normangrubb.com dedicated to his life. Other writings of Norman Grubb may be found at www.christasus.com.