How I Survived 1,000 Attack Helicopter Combat Missions In Vietnam 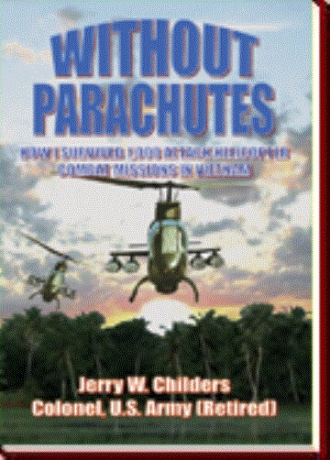 Our flight of UH-1 Huey helicopters was clawing its way through a bright blue sky one thousand feet above an intense green world of rice paddies and canals. The four other helicopters were locked in formation closely around me, our rotor blades overlapping. We were heavily loaded with infantry troops, getting ready to insert them on a combat assault in central . We decreased power and started our descent toward the landing zone. Suddenly our world erupted in gunfire, some rounds going down but most coming up at us. The enemy had opened fire with automatic weapons and my door gunners were shooting back with their machine guns. Hot spent brass from the machine gun behind me rained on my helmet, some burning its way down the back of my shirt. The radios blasted calls of “receiving fire”, “mayday” and “going down” in my earphones.

There was little time to worry about the bullets that were popping and hissing around me. I had to keep total focus on maintaining my position in the formation. One miscue and my rotor blades would strike those of another helicopter, immediately turning both aircraft into free falling boxes of death. Nobody would survive because unlike fixed wing combat crews, helicopter combat crews flew without parachutes.

Rounds were now striking my aircraft. A window shattered and a door gunner yelled “I’m hit”. Small whisks of smoke started coming out of the helicopter in front of me. Then, without further warning, it burst into flames. At first slowly, then with increasing speed, the stricken helicopter scribed an arch of black smoke, finally crashing in a ball of fire. Now I was in the lead. The other aircraft in the flight were flying formation on me and the decisions I had to make in the next few seconds could mean life or death, not only to our aircrews but also for the dozens of infantry soldiers in our care.

Should I abort the approach? turn left? turn right? climb? descend?  I pleaded for divine guidance. Suddenly, I heard a small voice inside my head say “go with the wind – go with the wind”. What in the world did that mean? As I looked around seeking another clue, I noticed the death plume of greasy smoke from a crashed and burning aircraft. The smoke was blowing across my flight path from the right to the left at a good clip. Now I had it! I turned the flight left ninety degrees. By doing so, the wind was now pushing us about twenty miles per hour faster over the ground. The enemy bullets were no longer hitting in the cockpit, but were harmlessly hitting around the tail of the aircraft. The Vietcong gunners were still aiming one helicopter length in front of our aircraft as they had been taught. But since we were flying faster, their lead was not enough. In moments we were out of danger and on our way to the alternate landing zone.

I woke up with a start. It had all been a dream, but a special dream that would save my life several times over the next few years. I did not know it then, but I was destined to spend three years of my life flying helicopters in combat in . At the time of the dream I was a brand new Army Aviator assigned to the 11th Air Assault Division at . The Division was soon going to be renamed the 1st Cavalry Division and deployed to . It was September 1964, and my assault helicopter company was intensely training for deployment. Each day we were practicing tighter and tighter formation flying.

During a recent classroom training session older pilots who had already survived a tour in told us war stories. Their vivid description of actual combat, and our daily formation flight training missions formed the genesis of my dream. The dream took place three years into a twenty nine year active duty Army career. In order to place it in proper perspective, it is necessary to start at the beginning.

This book straps the reader into the cockpit with an attack helicopter pioneer as he recalls three years of Vietnam combat and a quarter century of flying Army aircraft. He arrived in Vietnam in 1964 and volunteered to join the world’s first attack helicopter company.

The Utility Tactical Transport Helicopter Company (UTT) had deployed to Vietnam in 1962. It came equipped with the U.S. Army’s brand new UH-1 Huey, a helicopter originally designed as an aerial ambulance. The crews, not happy with a passive combat role, began experimenting with ways to strap guns on their aircraft and attack the enemy.

Through a deadly process of trial and error the pilots pushed their machines to the edge. Mistakes were made, crews were lost and lessons were learned. These lessons evolved into combat tactics and became fondly known as the 12 Cardinal Rules of Attack Helicopter Combat.

Upon joining the unit the author learned about the rules. He studied them and on his first day in combat, developed his own 13th rule. Over his ensuing three years in Vietnam, the rules, especially the 13th, helped him survive over one thousand combat missions. This book provides the reader with a cockpit level view of dozens of those missions and describes several additional near disaster situations encountered by the author during over 25 years flying Army Aircraft.

The author is successful in striking a balance between the grim realities of combat and the often humorous aspects of life among a group of high spirited aviators who fly into the jaws of death daily without a parachute on their back.

He suggests that the 13 rules, although developed during a different war and at a different time, are applicable to armed helicopter combat operations in the 21st Century.

The book contains about 200 pages and is nicely illustrated with 50 photographs.

Colonel (Retired) Jerry W. Childers was instrumental in pioneering UH-1 Huey and AH-1 Cobra attack helicopter combat tactics. He spent three years in Vietnam spanning the period 1964–1973. Between tours he was a production test pilot at the Bell Helicopter Plant and a fixed wing instructor pilot. He subsequently served at all staff levels in the Army including a tour with the Director of Plans and Operations in the Pentagon. He commanded the 18th Corps Aviation Company in Vietnam, the 25th Combat Aviation Battalion in Hawaii and the Combat Aviation Brigade of the 7th Infantry Division in California. He attended every level of Army schooling including the Army War College. He served for almost two years as Chief Of Staff of the 101st Airborne Division (Air Assault), and capped his career as the Director of Operations and Plans for the U.S. Army in the Pacific. His combat awards include the Silver Star Medal, Distinguished Flying Cross (three awards), Bronze Star Medal (three awards), Air Medal (forty seven awards), Purple Heart Medal and several Vietnamese awards for valor. After retiring from the Army he taught accounting and business administration courses at Hawaii Pacific University and other colleges.