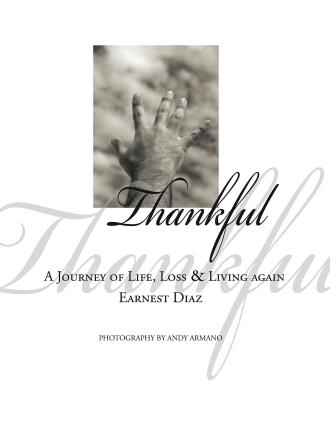 We live in a time that seems to have natural and unnatural disasters happen seemingly every week. We live in fear of global terrorism. People are being killed for the simple reason of intolerance. Children are being abandoned for reasons stemming from poverty, to mental illness, to basic neglect. With this time of unrest continually around us, we must learn to be even more Thankful of those we cherish.

As you read through this work, you will hopefully recall events, instances, and moments in your life which may bring forth memories of a past that has helped you to become a stronger person today.

This work is a celebration of a journey which leads to a path of growth, strength, and the truest love one can ever find. That love being, the love of oneself.

With each and every worry we all have on a daily basis. When we get down because of the things we do not have . . . this book reminds us of just how much we do have and reminds us of why we should always remain . . . "THANKFUL."

At a very early age, my heart was set on becoming a fashion designer for women, men, and children. In focusing on this goal, my work has allowed me the opportunity to meet and work for some of the world''s most incredible people, such as the world''s fastest man, and one of the world''s most beloved clowns. I have also been the stylist for a television piolet and I have been afforded the opportunity to dress some of the best up and coming acting talent in the business.

This work was brought to life due to the losses I encountered over what was supposed to be the happiest time of the year. The Holiday season of 2004 proved to be a survival of sanity via mind, heart, and soul. This work was intended to be my way out of not falling into a place I feared. That place being depression. In sharing my thoughts with a friend, I soon discovered these thoughts were not just for me. After she read my thoughts, I saw that they affected her in a way that let know she was not alone.

For so long I felt these losses to be a punishment, when in reality they have been my gifts from those I have lost.

They are my gifts of growth, strength, and the ability to help others going through similar situations.